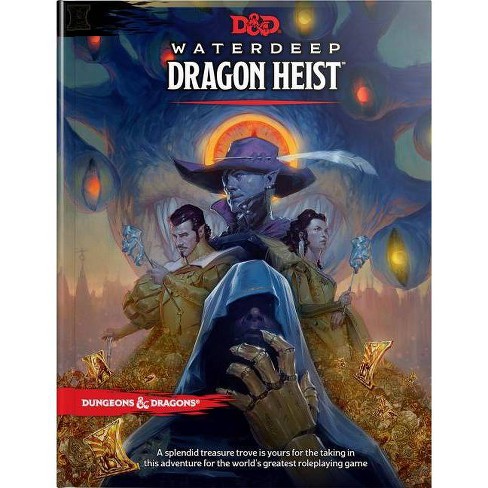 "A splendid treasure trove is yours for the taking in this adventure for the world's greatest roleplaying game"--Cover.

Experience the ultimate urban treasure hunt in this adventure for the world's greatest roleplaying game. "A perfect starter campaign."--Andrew Whalen, Newsweek "D&D acolytes are everywhere...Tech workers from Silicon Valley to Brooklyn have long-running campaigns, and the showrunners and the novelist behind 'Game of Thrones' have all been Dungeon Masters."--Neima Jahromi, The New Yorker "Want to be part of something big?"--A parchment tied to a flying snake, page 38 of Dragon Heist Welcome to Waterdeep. You're summoned by Volothamp Geddarm, famous explorer and raconteur, to complete a simple quest. Is anything ever really simple though? - Waterdeep, known as the City of Splendors, is one of D&D's most iconic locations. Also the setting for the board game Lords of Waterdeeep, it's the jewel of the Sword Coast--a sprawling melting pot held together by firm laws and swift justice. - Take players through levels one to five in this Dungeons & Dragons adventure. Five story arcs guide players through each level for a multi-session campaign experience inspired by classic heist films. - In D&D, you and your friends coauthor you own legend. Guided by a Dungeon Master, you create characters and play their roles in a story, rolling dice and navigating maps as you unfold a tale as limitless as your imagination. - Dungeons & Dragons is the world's greatest roleplaying game. Created in 1974, D&D transformed gaming culture by blending traditional fantasy with miniatures and wargaming.

"[Waterdeep: Dragon Heist] is state of the art tabletop design. . .one of the best introductions to D&D that I've ever come across."--Charlie Hall, Polygon.com "Waterdeep: Dragon Heist is a shining example of what Dungeons & Dragons can be and should be: fun and unpredictable."--Gavin Sheehan, BleedingCool.com
If the item details above aren’t accurate or complete, we want to know about it. Report incorrect product info.