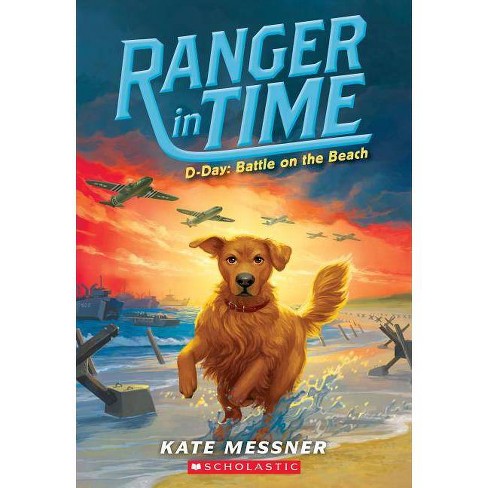 Ranger, a time-traveling golden retriever with search-and-rescue training, heads to Normandy on the morning of the D-Day invasion where he meets Leo, a Jewish boy who is hiding with a local farmer, and Walt, a young American soldier fighting to free France from the Nazis. Illustrations.

Ranger, the time-traveling golden retriever with search-and-rescue training, heads to Normandy during World War II!In this adventure, Ranger heads to Normandy on the morning of the D-Day invasion and finds himself in the middle of one of the fiercest battles of World War II. Ranger meets Leo, a Jewish boy who is hiding with a local farmer, and Walt, a young African-American soldier fighting to free France from the Nazis. Walt is in the 320th Balloon Battalion, so it's his job to help operate the enormous barrage balloons that fly over the American troops, shielding them from enemy planes. It's pure chaos, with thundering warplanes, falling bombs, and exploding land mines. Will Ranger, Leo, and Walt survive?

Praise for Ranger in Time: "This excellent story contains historical details, full-page illustrations, and enough action to keep even reluctant readers engaged." -- School Library Journal"The third-person narration expertly balances Ranger's thoughts between the appropriately doglike (squirrels! bacon!) and the heroic (Ranger's drive to find and protect)." -- Kirkus Reviews"McMorris's richly rendered illustrations heighten the plot's many moments of danger and drama, and Messner incorporates a wealth of historical details into her rousing adventure story." -- Publishers Weekly"Readers will love following Ranger on his thrilling adventure along the Oregon Trail. What a great way to learn about history!" -- Lauren Tarshis, author of the I Survived series

Kate Messner is the author of The Seventh Wish; All the Answers; The Brilliant Fall of Gianna Z., winner of the E. B. White Read Aloud Award for Older Readers; Capture the Flag, an SCBWI Crystal Kite Award winner; Hide and Seek; Manhunt; and the Ranger in Time and Marty McGuire chapter book series. A former middle-school English teacher, Kate lives on Lake Champlain with her family and loves reading, walking in the woods, and traveling. Visit her online at katemessner.com.
If the item details above aren’t accurate or complete, we want to know about it. Report incorrect product info.