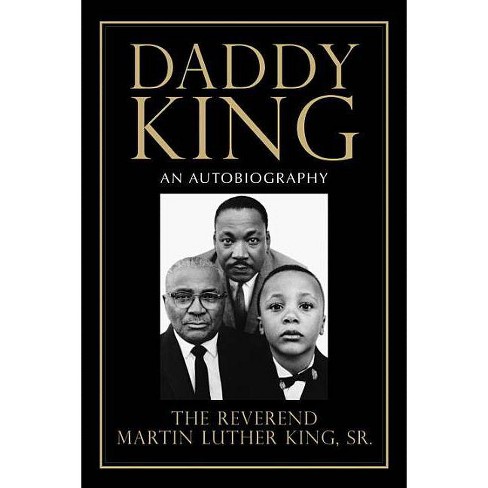 $12.59
no reviews yet
be the first!be the first! ratings
Shipping
Free standard shipping with RedCard
Loading, please wait...
Help us improve this page

From coming of age under poverty and the looming threat of racial violence to preaching from the Ebenezer pulpit for forty years, King, Sr., candidly reveals his life inside the civil rights movement, illustrating the profound influence he had on his son. Born in 1899 to a family of sharecroppers in Stockbridge, Georgia, Martin Luther King, Sr., came of age under the looming threat of violence at the hands of white landowners. Growing up, he witnessed his family being crushed by the weight of poverty and racism, and escaped to Atlanta to answer the calling to become a preacher. Before engaging in acts of political dissent or preaching at Ebenezer Baptist Church, where he would remain for more than four decades, King, Sr., earned high school and college diplomas while working double shifts as a truck driver--and he won the heart of his future wife, Alberta "Bunch" Williams. King, Sr., recalls the struggles and joys of his journey: the pain of leaving his parents and seven siblings on the family farm; the triumph of winning voting rights for blacks in Atlanta; and the feelings of fatherly pride and anxiety as he watched his son put his life in danger at the forefront of the civil rights movement. Originally published in 1980, Daddy King is an unexpected and poignant memoir. "There are two men I am supposed to hate. One is a white man, the other is black, and both are serving time for having committed murder. James Earl Ray is a prisoner in Tennessee, charged with killing my son. Marcus Chenault was institutionalized as deranged after shooting my wife to death. I don't hate either one. There is no time for that, and no reason, either. Nothing that a man does takes him lower than when he allows himself to fall so far as to hate anyone." --The Reverend Martin Luther King, Sr., in Daddy King
If the item details above aren’t accurate or complete, we want to know about it. Report incorrect product info.