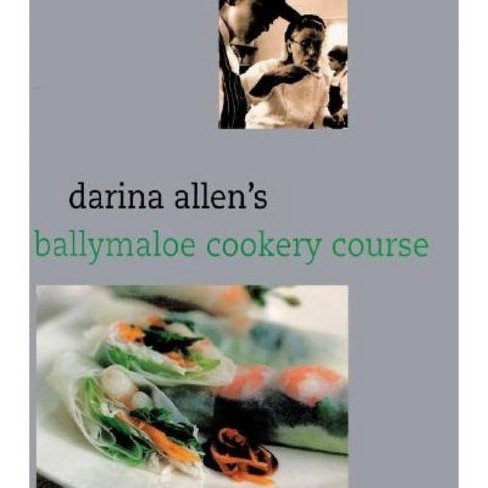 Darina Allen's pupils at Ireland's Ballymaloe Cookery School have been clamoring for her to write a definitive book for many years. At last, she has put down her recipes and thoughts, tips and shortcuts, together with all the fundamental techniques necessary for cooking fresh and delicious food.

Cooking well is a mixture of art, science, taste, and experimentation. Darina Allen's Ballymaloe Cooking School Cookbook has been organized to present simple and classic recipes. She even includes "modern" recipes, using the international ingredients that are readily available in our supermarkets today. Since no book can contain every recipe ever invented, Darina Allen, by demonstrating over 200 basic techniques, has instead given readers the confidence and know-how to experiment and create their own dishes. From phyllo pastry to the art of carving, from preserving lemons to making pasta, from culturing yogurt to butterflying a leg of lamb, these clear instructions, given by one of the world's great cooking teachers, will inspire and encourage the art of fine food.

Why does food matter, and why buy the best ingredients available? Darina Allen explains in succinct and pithy detail how a dish's flavor develops; she proves that the enjoyment of good food is a sensation not to be missed. With sections on using the freezer, stocking the pantry, menu planning, and choosing wines, as well as information on basic equipment, Darina Allen's Ballymaloe Cooking School Cookbook combines all the essentials needed to cook with flair.

Students who complete the three-month certificate course at Ballymaloe Cookery School are hired by fine restaurants worldwide. Here now is a book that contains all of Darina Allen's instruction and expertise. Destined to become everyone's kitchen bible, Darina Allen's Ballymaloe Cooking School Cookbook is a spectacular gift for the beginner, as well as a useful tool for experienced cooks.

Darina Allen runs the world-renowned cooking school at Ballymaloe, Ireland, which she and her husband, Tim Allen, founded in 1981. Courses there range from a weekend mastering perfect jams to the three-month certificate course run twice a year. She is Ireland's most famous cooking-show host, having presented nine series of her program, Simply Delicious, on television around the world.

Darina Allen is a tireless campaigner for local produce. She is a natural teacher, whose energy and enthusiasm for good things are quite contagious. She was awarded the 2001 Veuve Clicquot Irish Businesswoman of the Year Award. Lauded as the food ambassador of Ireland, Darina Allen lectures and travels extensively. Her outstanding work as both teacher and cook has placed her firmly on the international culinary map.

Darina Allen is the author of several cookbooks, including Irish Traditional Cooking, winner of the Langhe Ceretto-SEI Prize, and her Year at Ballymaloe Cookery School, which was short-listed for the IACP Julia Child Awards. A Simply Delicious Irish Christmas is also available from Pelican.