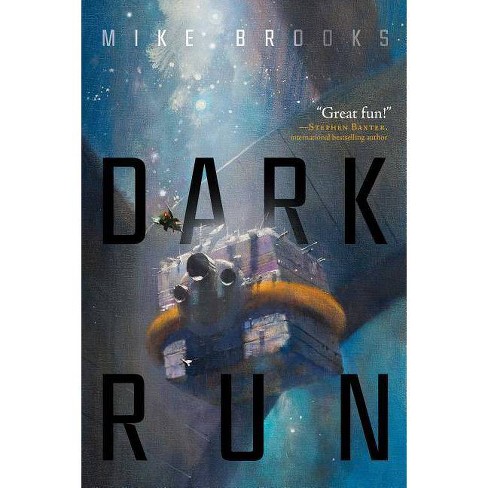 "Originally published in Great Britain in 2015 by Del Rey, one of the Penguin Random House group companies."

In this debut space epic, a crew of thieves and con artists take on a job that could pay off a lot of debts in a corrupt galaxy where life is cheap and criminals are the best people in it. The Keiko is a ship of smugglers, soldiers of fortune, and adventurers travelling Earth's colony planets searching for the next job. And they never talk about their past--until now. Captain Ichabod Drift is being blackmailed. He has to deliver a special cargo to Earth, and no one can know they're there. It's what they call a dark run...And it may be their last.

"A pure scoundrel-centric tale that is worthy of the Serenity crew and will make any Firefly fan smile."-- ", Geek Dad"

"Dark Run is a fast paced smuggler story that delivers all the crooked and devious action you could ask for."-- "SFBook Reviews"

Brooks turns in an enjoyable adventure that has all of the fast action and clever dialog fans of the genre look for, with well-drawn secondary characters who also have moments to shine. Suggest this debut to enthusiasts of caper plots and stories such as Chris Wooding's Ketty Jay novels, and, of course, Firefly.--Library Journal "April 15th, 2016"

Brooks's terrific debut demonstrates that a good caper tale can take place anywhere, even in interstellar space. Capt. Ichabod Drift and the crew of the Keiko have an unusual approach to galactic law and order, one that ranks "convenience over obedience." All of them have secrets that they'd rather not reveal, but Drift's is the biggest of all: he was once known as Gabriel Drake, a notorious privateer. He thought he'd escaped his past, but now it has come calling in the form of Nicolas Kelsier, ex-minister of Extra-terrestrial Resource Acquisition for the Europan Commonwealth, and Drift's former boss. Kelsier offers him both the carrot and the stick: Drift can take Kelsier's smuggling commission and earn a handsome sum for himself and his crew--or have his past revealed to the Federation of African States and the rest of the galaxy. Even with elaborate planning, capers never run easily, and this one is no different. It will take all the skills of each of the Keiko's crew members and some "outrageously ballsy chicanery" on Drift's part if they are to escape with their lives, let alone make a profit. Fans of rip-roaring space adventures will greatly enjoy this one.--Publishers Weekly "March 7th, 2016"

Mike Brooks is the author of The God-King Chronicles epic fantasy series, the Keiko series of grimy space-opera novels, and various works for Games Workshop's Black Library imprint including RITES OF PASSAGE and BRUTAL KUNNIN. He was born in Ipswich, Suffolk, and moved to Nottingham to go to university when he was eighteen, where he still lives with his wife, cats, and snakes. He worked in the homelessness sector for fifteen years before going full-time as an author, plays guitar and sings in a punk band, and DJs wherever anyone will tolerate him. He is queer, and partially deaf (no, that occurred naturally, and a long time before the punk band).
If the item details above aren’t accurate or complete, we want to know about it. Report incorrect product info.