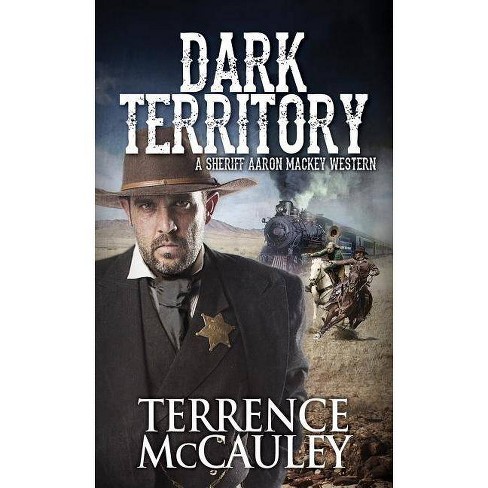 In the boomtown of Dover Station, Montana, tracks have been laid and everyone's looking to make a fortune, lawfully or not. And the law has something to say about it--one bullet at a time. Original.inal.

In the boomtown of Dover Station, Montana, tracks have been laid and everyone's looking to make a fortune, lawfully or not. And the law has something to say about it--one bullet at a time . . .

DOVER STATION--WHERE DEATH RIDES FASTER THAN THE WIND A rash of deadly train robberies has the chief investor of Dover Station feeling itchier than a quick draw without a target. And he wants Sheriff Aaron Mackey to scratch that itch with every bullet his battered badge authorizes him to shoot. When Mackey and his backup gun down four kill-crazy bandits, they uncover a plot cooked up by respected citizens of Dover Station--someone who can pull enough strings to replace Mackey with a disgraced marshal from Texas. Now Mackey's badge may not say much, but his gun defies all fear. Anyone who stands between Mackey and the future of Dover Station is about to become buried in the pages of history . . . "Hard to put down . . . because of the gritty and stylish narrative, the virtually nonstop action."
--Publishers Weekly on Terrence McCauley's Sympathy for the Devil

Praise for the Sheriff Aaron Mackey Westerns "A captivating Western...the setting is harsh and evocative; the villain is sufficiently slimy and scheming; and even the violence is gratifying, as the punches are strong and swift and the bullets whiz by close enough to make readers' hair stand on end. The plot progresses with calculated, yet dramatic, twists and turns...The author manages to craft an ending that will strike the reader's sweet spot between being deeply satisfied and yearning for more. Folks picking up this title will likely seek out the preceding book and will eagerly wait for the next."
--Booklist, STARRED Review on Dark Territory Comes out guns blazing from the very first page and doesn't let up until the action-packed finale...McCauley does an expert job of weaving suspense and intrigue into this traditional Western tale. Along with the enjoyable Western tropes, McCauley incorporates elements of a good old-fashioned mystery that make this book a real page-turner.
--True West on Dark Territory "Dark Territory has much to offer. Well written, it is at once a first-rate Western, expertly exploiting all the genre's tropes and traditions, and a political thriller, as Mackey needs to rely on his acumen as much as his brawn and shooting skills. Well-paced, its quieter moments are as compelling as its outstanding action set pieces. McCauley has definitely piqued my interest--I'm going to seek out previous works, as well as follow him in the future."
--Mystery Scene "Sheriff Mackey is a hard-nosed Western hero of the Civil War who packs a punch with both his fists and his guns. Prepare yourself for a fast-paced ride as you turn the pages as tension builds until the final chapter"
--The Historical Novels Review on Dark Territory "Terrance McCauley has done it again. The author of Where The Bullets Fly has followed it up with another excellent read, Dark Territory...Train robberies, labor agitators, small town elections, suicides, love interests, attempted assassinations, and shoot 'em ups fill the book. The action starts on the first page and keeps on going. Twists and turns kept me from figuring out the ending until I had only 2 1/2 pages left to read. Enough, I don't want this review to be as long as the book. Get it, read it, you will be glad you did."
--Rope Burns on Dark Territory "The action starts in chapter one and doesn't let up."
--Rope Burns "Sheriff Mackey is clearly defined, realistic for the time period, and totally believable. The pace, from the opening pages to the final satisfying end, is unrelenting. An exceptional Western novel."
--Historical Novels Review on Where the Bullets Fly "Fans of crime fiction and thrillers know Terrence McCauley as a first-rate storyteller who can handle action scenes while capturing the mood of New York City in the 1930s and today. Turns out, McCauley's more than a fair hand at Westerns too...Imagine a spaghetti Western with flawed characters and nonstop action. Or Rooster Cogburn, without the eyepatch and a whole lot meaner."
--Roundup Magazine on Where the Bullets Fly

Terrence P. McCauley is an award-winning writer of crime fiction, thrillers, historical fiction and Westerns. His Western fiction debut, Where the Bullets Fly, received a Western Fictioneers Peacemaker Award and was named Best New Western Paperback of the Year by True West magazine. His short stories have been featured in Thuglit, Spinetingler Magazine, Shotgun Honey, Big Pulp, and other publications. A Spur Award and ITW Award nominee, he is a recipient of the Silver Medal for Historical Fiction from the Military Writers Society of America. He is a member of the New York City chapter of the Mystery Writers of America, the International Thriller Writers, the International Crime Writers Association, and the Montana Historical Society. A proud native of the Bronx, New York, he can be found online on Facebook, Twitter or at TerrencePMcCauley.com.
If the item details above aren’t accurate or complete, we want to know about it. Report incorrect product info.