Daughter of the Blood - (Black Jewels) by Anne Bishop (Paperback) 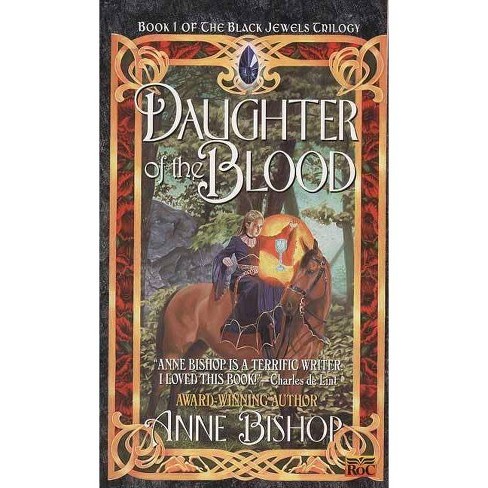 The Dark Kingdom prepares itself for the fulfillment of an ancient prophecy--the arrival of a new Queen, a Witch who will wield more power than even the High Lord of Hell himself. But this new ruler is young, and very susceptible to influence and corruption; whoever controls her controls the Darkness.

In the first novel in New York Times bestselling author Anne Bishop's beloved Black Jewels Trilogy, a race of witches and warlocks whose power is channeled through magical jewels will meet their once and future queen... Seven hundred years ago, a Black Widow witch saw an ancient prophecy come to life in her web of dreams and visions. Now the Dark Kingdom readies itself for the arrival of its Queen, a Witch who will wield more power than even the High Lord of Hell himself. But she is still young, still open to influence--and corruption. Whoever controls the Queen controls the darkness. Three men--sworn enemies--know this. And they know the power that hides behind the blue eyes of an innocent young girl. And so begins a ruthless game of politics and intrigue, magic and betrayal, where the weapons are hate and love--and the prize could be terrible beyond imagining...

Praise for Daughter of the Blood "A terrific writer...the more I read, the more excited I became because of the freshness of [her] take on the usual high fantasy setting, the assurance of [her] language, all the lovely touches of characterization that [she slips] in so effortlessly."--Charles de Lint "Darkly mesmerizing...[a] fascinating, dark world."--Locus "Lavishly sensual...a richly detailed world based on a reversal of standard genre cliches."--Library Journal

"Dark, morbid, sinister, and yet it holds you completely fascinated and spellbound by its beauty...One of the most original and readable books in the fantasy genre."--The 11th Hour

New York Times bestselling author Anne Bishop is a winner of the William L. Crawford Memorial Fantasy Award, presented by the International Association for the Fantastic in the Arts, for The Black Jewels Trilogy. She is also the author of the Ephemera series, the Tir Alainn trilogy, and the Novels of the Others--including Etched in Bone, Marked in Flesh, Vision in Silver, Murder of Crows, and Written in Red. She lives in upstate New York.
If the item details above aren’t accurate or complete, we want to know about it. Report incorrect product info.