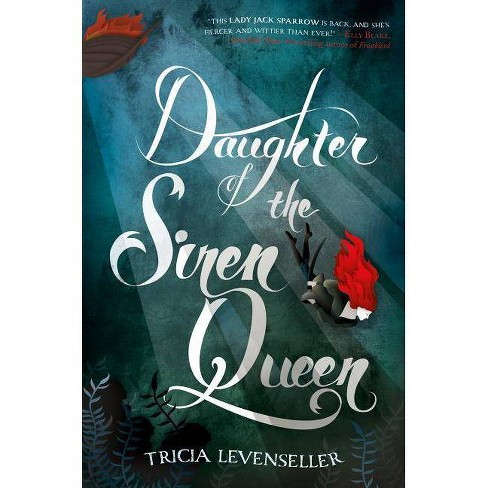 Seventeen-year-old pirate captain Alosa, the capable, confident, and occasionally ruthless heroine of "Daughter of the Pirate King, " is back in this action-packed sequel where she must race her father to a legendary hidden treasure.

The capable, confident, and occasionally ruthless heroine of Daughter of the Pirate King is back in this action-packed sequel that promises rousing high seas adventures and the perfect dash of magic.

Alosa's mission is finally complete. Not only has she recovered all three pieces of the map to a legendary hidden treasure, but the pirates who originally took her captive are now prisoners on her ship. Still unfairly attractive and unexpectedly loyal, first mate Riden is a constant distraction, but now he's under her orders. And she takes great comfort in knowing that the villainous Vordan will soon be facing her father's justice. When Vordan exposes a secret her father has kept for years, Alosa and her crew find themselves in a deadly race with the feared Pirate King. Despite the danger, Alosa knows they will recover the treasure first . . . after all, she is the daughter of the Siren Queen. In Daughter of the Siren Queen, Tricia Levenseller brings together the perfect mix of thrilling action, tense battle scenes, and a heart-pounding romance.

Praise for Daughter of the Siren Queen:

This lady Jack Sparrow is back, and she's fiercer and wittier than ever! --Elly Blake, New York Times bestselling author of Frostblood

Levenseller is just as much a siren as her protagonist--her words will pull you in, and there's no escaping them. --Charlie N. Holmberg, author of The Paper Magician Series. Levenseller comes into her own in this sequel to Daughter of the Pirate King (2017), penning an argh-worthy blend of pirate derring-do and lively romance. ... Deadly sirens join the ranks of strong, smart females in this book, giving it a definite feminist edge. --Booklist

The author has yet again captured the adventure, romance, and ruthless ways of the high seas in this sequel to Daughter of the Pirate King. ... This fast-moving adventure with strong female characters would be great for those who love a good pirate story, a touch of romance, and action-packed sword fighting. --School Library Journal This is for fans of the Pirates of the Caribbean franchise who will definitely be on board with this female Jack Sparrow and her crew. -- VOYA Praise for Daughter of the Pirate King: Readers should rejoice, because we now have a lady Jack Sparrow on our hands! Daughter of the Pirate King kidnapped my interest from the first chapter and never let it go! It's a superior debut with a deeply entangled romance, a fearsome heroine not to be trifled with, a clever hero that you seriously want to trifle with, and a plot twist that makes a rollercoaster seem stable. With a cunning plot, robust writing, and complicated characters, any reader will enjoy being manipulated in Levenseller's capable hands. Definitely for fans of Pirates of the Caribbean, fierce heroines, slow-burning romances, and adventures that can turn sour in the space of a gasp. Not for fans of complacent heroines, soothing plots, or those who don't speak sarcasm. --Anna Banks, author of the New York Times Bestseller Of Triton Levenseller has created a formidable female character who can take care of herself as she makes some hard decisions. Hand to skilled readers seeking true adventure with swashbuckling, sword fighting, and a great problem-solving heroine. --School Library Journal Levenseller makes an impressive debut with this funny, fast-paced, and romance-dashed nautical fantasy, set in an alternate world of pirates, sirens, and myriad islands....This one's not to be missed. -- Publishers Weekly, starred review

Tricia Levenseller's vivacious debut novel, the first in a duology, boasts stormy seas, sexy pirates, swordplay and a heroine who conquers all three with aplomb.... A rip-roaring high seas escapade with a tinge of fantasy, Daughter of the Pirate King will engage and enthrall its teen audience. -- Shelf Awareness

Tricia Levenseller, author of Daughter of a Pirate King, is from a small town in Oregon, but she now lives next to the Rocky Mountains in Utah with her bossy dog, Rosy. She received her degree in English Language and Editing, and she is thrilled that she never has to read a textbook again. When she's not writing or reading, Tricia enjoys putting together jigsaw puzzles, playing volleyball, and watching her favorite TV shows while eating extra-buttered popcorn.
If the item details above aren’t accurate or complete, we want to know about it. Report incorrect product info.