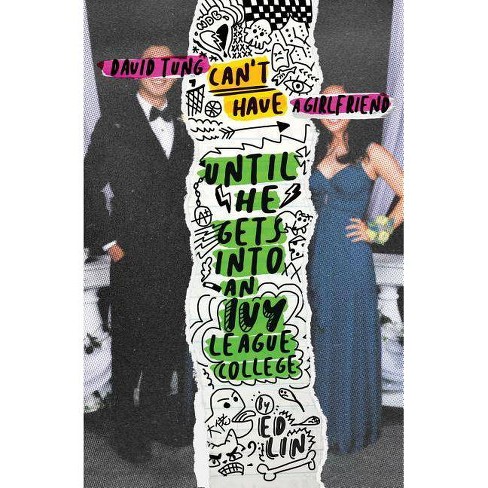 "You're not allowed to have a girlfriend until college," my mother warned. "And you'd better get into an Ivy League school!"

David Tung Can't Get a Girlfriend until He Gets into an Ivy League College is the first official young adult novel from Ed Lin, author of the acclaimed novels Waylaid and This Is a Bust. Humorous and socially complex, the book tells the story of an Asian American New Jersey high-school student as he navigates multiple social circles as well as parental pressures to get As and conform to cultural norms and expectations. Amid these pressures from outside is the fear he will die alone, whether he gets into Harvard or not. Exploring class tensions (for example, regular school in an upscale, Asian-majority suburb versus weekend Chinese school in working-class Chinatown) and contemporary social neuroses, David Tung Can't Get a Girlfriend is an already hotly anticipated book from an author whose debut novel, Waylaid, established him as a pioneering, provocative, welcome new voice in young adult fiction. Ed Lin, a journalist by training, is the author of several award-winning books, including: Waylaid, his literary debut; the Robert Chow crime series, set in 1970s Manhattan Chinatown (This Is a Bust, Snakes Can't Run and One Red Bastard); and the Taipei Night Market crime series (Ghost Month, Incensed and 99 Ways to Die). Lin is the first author to win three Asian American Literary Awards. He lives in New York with his wife, actress Cindy Cheung.
If the item details above aren’t accurate or complete, we want to know about it. Report incorrect product info.