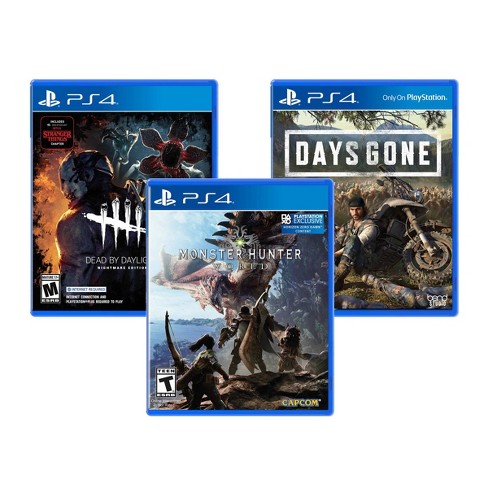 Days Gone: At its core, Days Gone is about survivors and what makes them human: desperation, loss, madness, betrayal, friendship, brotherhood, regret, love—and hope. It's about how, even when confronted with such enormous tragedy, hope never dies. Using the power of PlayStation®4 and Unreal Engine 4, Days Gone offers an incredibly realistic and detailed open-world experience. Immerse yourself in vast and hostile environments, and explore their secrets. Search abandoned vehicles, houses, truck stops and towns as you scavenge for resources. But be careful— day and night cycles, along with dynamic weather systems, all affect gameplay and enemy behavior. Perfect your gameplay with an endless combination of strategy and play in every situation. Craft customized items using pieces and parts found in the field, from brutal melee weapons to traps and more. Act wisely, as every choice can be the difference between life and death.

Also Includes the Extra Content from the Original Release – The original retail release included 4 extra pieces of content! The 80’s Suitcase add-on, The Bloodstained Sack add-on, The of Flesh and Mud Add-on, The Spark of Madness add-on.

Monster Hunter: World: Battle gigantic monsters in epic locales. As a hunter, you'll take on quests to hunt monsters in a variety of habitats. Take down these monsters and receive materials that you can use to create stronger weapons and armor in order to hunt even more dangerous monsters.

Once every decade, elder dragons trek across the sea to travel to the land known as the New World in a migration referred to as the Elder Crossing.

To get to the bottom of this mysterious phenomenon, the Guild has formed the Research Commission, dispatching them in large fleets to the New World.

As the Commission sends its Fifth Fleet in pursuit of the colossal elder dragon known as Zorah Magdaros, one hunter is about to embark on a journey grander than anything they could have ever imagined.
If the item details above aren’t accurate or complete, we want to know about it. Report incorrect product info.