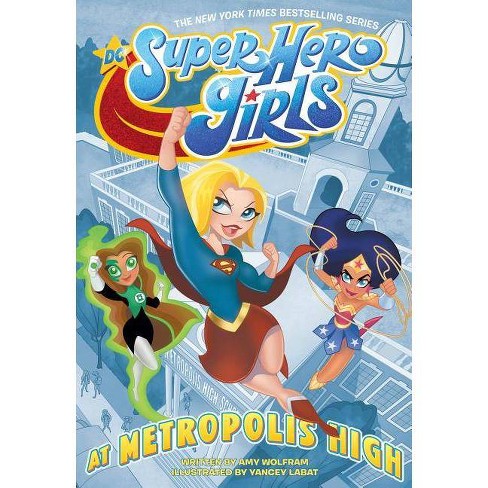 "Supergirl based on the characters created by Jerry Siegel and Joe Shuster, by special arrangement with the Jerry Siegel family."

A new era of DC Super Hero Girls begins in DC Super Hero Girls: At Metropolis High! A new era begins for the DC SUPER HERO GIRLS...but battling super-villains is easy compared to finding the right after-school club! Batgirl, Wonder Woman, Supergirl, Green Lantern, Bumblebee, and Zatanna are continually late to class because of their crime-fighting, and the principal is tired of hearing their excuses. These girls need to show more school spirit...or else they'll be suspended! Principal Chapin's demand that they each find an after-school club and stick with it for a whole week seems easy, until the girls get kicked out of the clubs they choose. Instead, they must think outside the box and step out of their comfort zones. As if having secret identities and balancing school with super-heroics didn't offer enough challenges! Amy Wolfram (Teen Titans, Teen Titans Go!) and Yancey Labat (DC Super Hero Girls) show off a new vision of the DC Super Hero Girls!

Amy Wolfram is a writer for television, movies, and comic books. She is super excited to be writing DC Super Hero Girls graphic novels! If she had to pick a favorite Super Hero Girl...she'd pick them all! Best known for writing for Teen Titans for both television (Teen Titans, Teen Titans Go!) and comics (Teen Titans: Year One, Teen Titans Go!), Amy has also had fun writing for many of her favorite characters; Barbie, Stuart Little, Ben 10, Thunderbirds, and Scooby-Doo. When not busy writing, she enjoys crafting and quilting. Yancey Labat is the bestselling illustrator of the original DC Super Hero Girls graphic novel series. He got his start at Marvel Comics before moving on to illustrate children's books from Hello Kitty to Peanuts for Scholastic, as well as books for Chronicle Books, ABC Mouse, and others. His book How Many Jelly Beans? with writer Andrea Menotti won the 2013 Cook Prize for best STEM (Science, Techonology, Education, Math) picture book from Bank Street College of Education.
If the item details above aren’t accurate or complete, we want to know about it.

5 out of 5 stars
mar29 - 2 years ago
Cute book, my kids enjoy reading it.
Did you find this review helpful?