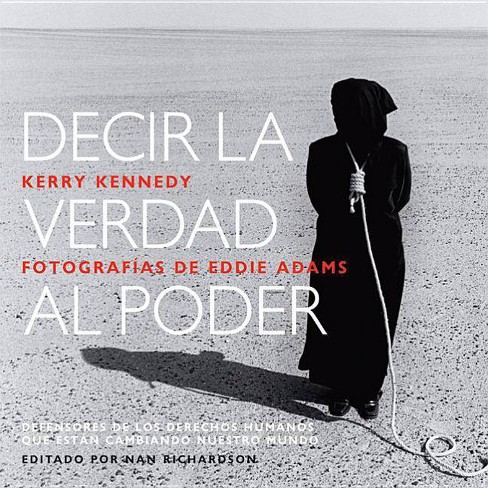 $45.00
no reviews yet
be the first!be the first! ratings
Shipping
Not available
Help us improve this page

"Decir la Verdad al Poder" presents heroes from over 36 countries, including Baltasar Garzon, Desmond Tutu, the Dalai Lama, Asma Jahangir, and Wangari Maathai. In searing and uplifting interviews, human rights defender Kerry Kennedy, daughter of Robert F. Kennedy, examines the quality of courage with people who are dramatically changing the course of events in their communities and countries. "Decir la Verdad al Poder" takes the reader to the frontlines and explores the issues that compel these human rights defenders: from free expression to religious self-determination, from minority rights to environmental activism, from child soldiers to sexual slavery. Accompanying the interviews is a powerfully moving series of portraits by world-renowned photographer Eddie Adams. Introduction by award-winning novelist, Carlos Fueuntes, a special addition to the Spanish edition.

Kerry Kennedy, a noted international human rights activist, established the Robert F. Kennedy Center for Human Rights in 1987. She serves on numerous boards and advisory committees and is Chair of the Amnesty International Leadership Council. She is a member of the Massachusetts and District of Columbia Bars.

Eddie Adams' photographs have been seen on the covers and front pages of several international publications. Recipient of more than 500 international, national and local awards including the Pulitzer Prize, he is one of the most decorated and published photographers in America today.