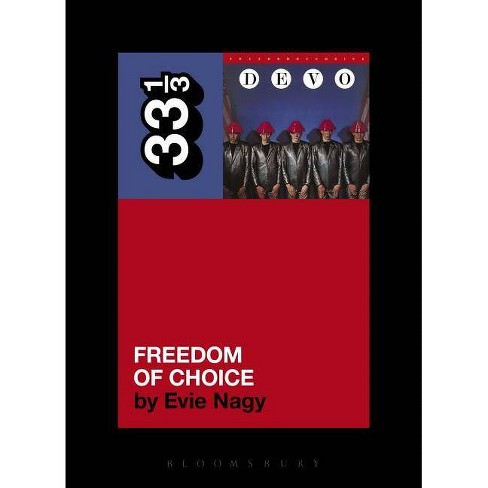 "Evie Nagy's 33 1/3 book on Devo's Freedom of Choice is fantastic, nerdy, swift and meticulous, and the book you have been waiting for if you even like Devo a little bit." --Jessica Hopper, Senior Editor, Pitchfork

"Evie Nagy's book on Freedom of Choice is a solid look back at the point where everything changed for Devo. As 33 1/3 books go, this is one of the more straightforward ones, built on research and interviews with a lot of the key players, looking at the album's creation and its place in Devo's career, It's a good read, and Nagy gets Devo's mix of nerdishness, humour, and serious political intent ... Nagy does a solid job bringing together new quotes from Devo members, others involved with the album, other people from Devo's circle over the years, and other musicians as well as bits from contemporary articles to tell a story that's well worth reading for anyone interested alternative music or 1980s pop culture." --TheFifteenth

"Get straight! Go forward! There's no Hazmat jacket required to whip through Freedom of Choice, which motors through Devo's rich history with all the relentless precision and curveball flourishes of their greatest works, and-best of all-vividly renders the very human souls behind the automaton anthems that devolutionized an era." --Sean Howe, author of Marvel Comics: The Untold Story

"Nagy's look at Devo offers some great anecdotes for the spuds out there. There are coked-out stories about the band in the studio and on the road, as well as a look at how the oddball aesthetic of Devo left its fingerprints on nerd culture over the last few decades, maybe even initiating the whole geek chic thing." --Hubert Vigilla, Ruby Hornet

"Nagy has conducted interviews with the remaining Devo members, has quoted extensively from interviews and has told in detail the history of the album including the elaborate studio sessions with producer Robert Margouleff ... This is compulsory reading for fans." - HHV-Mag

"Spuds will love the nostalgia and the insiders' information in Devo's Freedom of Choice ... Non-spuds who think of Devo as a one-hit wonder will be surprised to read of Devo's impact and musical influence. Spuds and non-spuds alike will want to dust off their old LPs or cassettes, or pull up some songs on YouTube, and relive the early days of Devo, a great band ahead of its time." -Reading Glutton