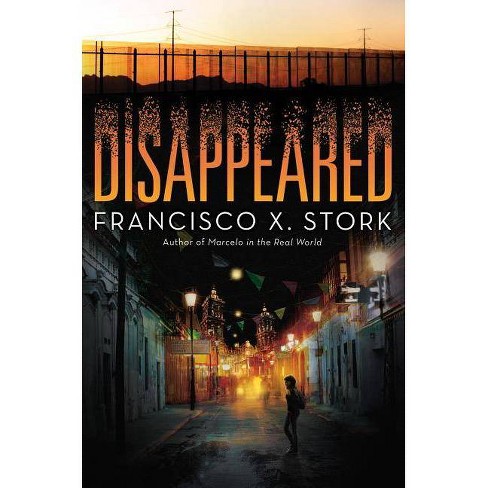 A missing girl, a determined reporter, and a young man on the brink combine for a powerful story of choices, suspense, and survival from the acclaimed, award-winning author of "The Last Summer of the Death Warriors" and "The Memory of Light."

* A tense thriller elevated by Stork's nuanced writing and empathy for every character, including the villains -- superb. -- Kirkus Reviews, starred reviewFour Months AgoSara Zapata's best friend disappeared, kidnapped by the web of criminals who terrorize Juárez.Four Hours AgoSara received a death threat -- and with it, a clue to the place where her friend is locked away.Four Weeks AgoEmiliano Zapata fell in love with Perla Rubi, who will never be his so long as he's poor.Four Minutes AgoEmiliano got the chance to make more money than he ever dreamed -- just by joining the web.In the next four days, Sara and Emiliano will each face impossible choices, between life and justice, friends and family, truth and love. But when the criminals come after Sara, only one path remains for both siblings: the way across the desert to the United States.Award-winning author Francisco X. Stork delivers his most gripping novel yet in this tense and timely international thriller.

Praise for Disappeared: Francisco Stork forces the reader to face the complicated realities of seeking truth in a place that has been ravaged by violence and is slowly piecing itself together. Stork reminds us that doing the right thing is not always easy. Everything worth a damn requires sacrifice -- especially justice and love. And sometimes, heartache is all that is left as proof that we've made the right choice. -- Isabel Quintero, award-winning author of Gabi, A Girl in Pieces* A timely and touching novel that will surely engross fans of true crime stories. This title would be a welcome addition to young adult collections. -- School Library Journal, starred review* A tense thriller elevated by Stork's nuanced writing and empathy for every character, including the villains -- superb. -- Kirkus Reviews, starred review* Stork beautifully explores the strong ties to one's home along with... the lure of power; and the strength necessary to dream, hope, and make positive change in such crushingly dangerous and difficult circumstances. -- The Horn Book Magazine, starred review* Stork uses parallel storylines to flesh out the two protagonists, and then slowly brings them together to a harrowing climax. Not only does this result in a riveting story, it also highlights the harsh complexity of young Mexicans' lives. Readers will find this thrilling as well as eye-opening. -- Booklist, starred reviewRight and wrong are not black and white in this world that tests the moral compass of its characters. Recommend this to readers who enjoy an exciting mystery presented in poignant, sensitive writing. -- Voice of Youth AdvocatesPraise for The Memory of Light: * Stork further marks himself as a major voice in teen literature by delivering one of his richest and most emotionally charged novels yet. -- Kirkus Reviews, starred review* Stork writes sensitively about Vicky's journey from near death to shaky recovery... A subject that needs the discussion Stork's potent novel can readily provide. -- Publishers Weekly, starred review* Accurate, heartbreaking, and hopeful... A beautiful read. -- School Library Journal, starred review* Undeniable emotional strength and an encouraging, compassionate message. Stork writes his characters with authenticity and respect... Highly rewarding. -- Booklist, starred reviewPraise for Marcelo in the Real World: [A] brisk, brilliant, unsentimental novel. -- Robert Lipsyte, New York Times Book Review* Stork introduces ethical dilemmas, the possibility of love, and other 'real world' conflicts, all the while preserving the integrity of his characterizations and intensifying the novel's psychological and emotional stakes. Not to be missed. -- Publishers Weekly, starred review* It is the rare novel that reaffirms a belief in goodness; rarer still is one that does so this emphatically. -- The Horn Book Magazine, starred reviewPraise for The Last Summer of the Death Warriors: * Stork's latest marks him as one of the most promising young adult authors of the new decade. -- The Horn Book, starred reviewComplicated yet ultimately endearing characters are a Francisco Stork standard. His latest novel doesn't disappoint. -- Chicago Sun-Times

Francisco X. Stork is the author of Marcelo in the Real World, winner of the Schneider Family Book Award for Teens and the Once Upon a World Award; The Last Summer of the Death Warriors, which was named to the YALSA Best Fiction for Teens list and won the Amelia Elizabeth Walden Award; Irises; The Memory of Light, which received four starred reviews; and Disappeared, which also received four starred reviews, and was named a Kirkus Best Book of the Year. He lives near Boston with his wife. You can find him on the web at franciscostork.com and @StorkFrancisco.
If the item details above aren’t accurate or complete, we want to know about it. Report incorrect product info.