Dispatches from the Edge - by Anderson Cooper (Paperback) 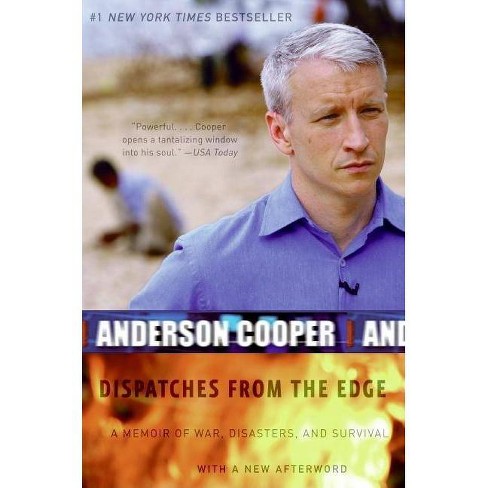 Striking, heartfelt, and utterly engrossing, Cooper's memoir is an unforgettable story that takes readers behind the scenes of recent cataclysmic events as seen through the eyes of one of America's most trusted, fearless, and pioneering reporters.

From one of America's leading reporters comes a deeply personal, extraordinarily powerful look at the most volatile crises he has witnessed around the world, from New Orleans to Baghdad and beyond.

Dispatches from the Edge of the World is a book that gives us a rare up-close glimpse of what happens when the normal order of things is suddenly turned upside down, whether it's a natural disaster, a civil war, or a heated political battle. Over the last year, few people have witnessed more scenes of chaos and conflict than Anderson Cooper, whose groundbreaking coverage on CNN has become the touchstone of twenty-first century journalism. This book explores in a very personal way the most important - and most dangerous - crises of our time, and the surprising impact they have had on his life.

From the devastating tsunami in South Asia to the suffering Niger, and ultimately Hurricane Katrina in New Orleans, Cooper shares his own experiences of traversing the globe, covering the world's most astonishing stories. As a television journalist, he has the gift of speaking with an emotional directness that cuts through the barriers of the medium. In his first book, that passion communicates itself through a rich fabric of memoir and reportage, reflection and first-person narrative. Unflinching and utterly engrossing, this is the story of an extraordinary year in a reporter's life.

Few people have witnessed more scenes of chaos and conflict around the world than Anderson Cooper, whose groundbreaking coverage on CNN has changed the way we watch the news. In this gripping, candid, and remarkably powerful memoir, he offers an unstinting, up-close view of the most harrowing crises of our time, and the profound impact they have had on his life.

After growing up on Manhattan's Upper East Side, Cooper felt a magnetic pull toward the unknown, an attraction to the far corners of the earth. If he could keep moving, and keep exploring, he felt he could stay one step ahead of his past, including the fame surrounding his mother, Gloria Vanderbilt, and the tragic early deaths of his father and older brother. As a reporter, the frenetic pace of filing dispatches from war-torn countries, and the danger that came with it, helped him avoid having to look too closely at the pain and loss that was right in front of him.

But recently, during the course of one extraordinary, tumultuous year, it became impossible for him to continue to separate his work from his life, his family's troubled history from the suffering people he met all over the world. From the tsunami in Sri Lanka to the war in Iraq to the starvation in Niger and ultimately to Hurricane Katrina in New Orleans and Mississippi, Cooper gives us a firsthand glimpse of the devastation that takes place, both physically and emotionally, when the normal order of things is violently ruptured on such a massive scale. Cooper had been in his share of life-threatening situations before -- ducking fire on the streets of war-torn Sarejevo, traveling on his own to famine-stricken Somalia, witnessing firsthand the genocide in Rwanda -- but he had never seen human misery quite like this. Writing with vivid memories of his childhood and early career as a roving correspondent, Cooper reveals for the first time how deeply affected he has been by the wars, disasters, and tragedies he has witnessed, and why he continues to be drawn to some of the most perilous places on earth.

Striking, heartfelt, and utterly engrossing, Dispatches from the Edge is an unforgettable memoir that takes us behind the scenes of the cataclysmic events of our age and allows us to see them through the eyes of one of America's most trusted, fearless, and pioneering reporters.

"Cooper weaves his experiences at CNN into a moving memoir."--Newsweek

"Cooper is a storyteller with plenty of heart. . . . A smart, soulful pageturner."--People

"Powerful. . . . Packs a visceral punch. . . . Cooper opens a tantalizing window into his own soul."--USA Today
If the item details above aren’t accurate or complete, we want to know about it. Report incorrect product info.