Double or Nothing - by Raymond Federman (Paperback) 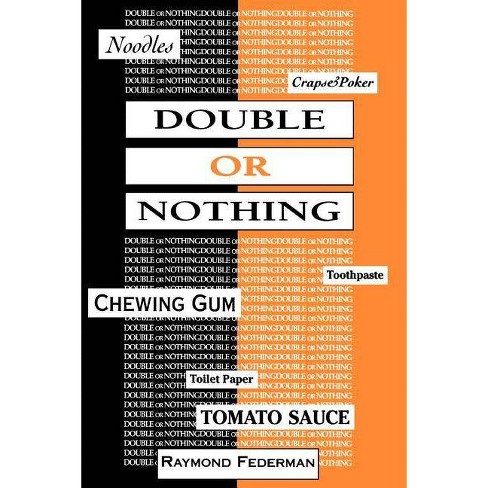 $28.99
no reviews yet
be the first!be the first! ratings
Shipping
Free standard shipping with RedCard
Loading, please wait...
Help us improve this page

"Double or Nothing" is a concrete novel in which the words become physical materials on the page. Federman gives each of these pages a shape or structure, most often a diagram or picture. The words move, cluster, jostle, and collide in a tour de force full of puns, parodies, and imitations. Within these startling and playful structures Federman develops two characters and two narratives. These stories are simultaneous and not chronological. The first deals with the narrator and his effort to make the book itself; the second, the story the narrator intends to tell, presents a young man's arrival in America. The narrator obsesses over making his narrative to the point of not making it. All of his choices for the story are made and remade. He tallies his accounts and checks his provisions. His questioning and indecision force the reader into another radical sense of the novel. The young man, whose story is to be told, also emerges from his obsessions.

Madly transfixing details-- noodles, toilet paper, toothpaste, a first subway ride, a sock full of dollars-- become milestones in a discovery of America. These details, combined with Federman's feel for the desperation of his characters, create a book that is simultaneously hilarious and frightening. The concrete play of its language, its use of found materials, give the viewer/reader a sense of constant and strange discovery. To turn these pages is to turn the corners of a world of words as full as any novel or literary discourse ever presented. "Double or Nothing" challenges the way we read fiction and the way we see words, and in the process, gives us back more of our own world and our real dilemmas than we are used to getting.

"Invention of this quality ranks the book among the fictional masterpieces of our age..." --Richard Kostelanetz, author of "The End of Intelligent Writing" and "The Old Fictions & the New"

"Federman takes the novel to the point of obsessive, ultimate reflexiveness-- and against all the odds of logic in fiction, "Double or Nothing" works like a charm... Somehow, in this furious and comic scheme, every distraction is an enrichment, and the processes of choice-- played with infinite fancifulness upon the page-- are the lovely geometry of personal assertion. Typography becomes typology; our hero becomes a citizen." --Marcus Klein, author of "After Alienation" and "Foreigners"

""Double or Nothing" is fashioned with enough genuine literary skill to place it among the great experimental novels of all time." --Library Journal