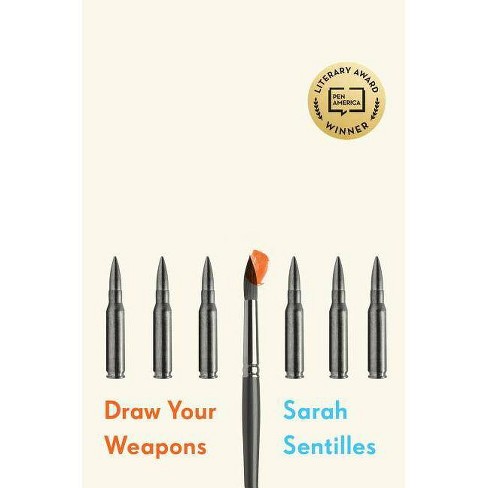 "A collage of death, savagery, torture, and trauma across generations and continents, Sarah Sentilles's Draw Your Weapons is painful to read, hard to put down, and impossible to forget."--O: The Oprah Magazine "In her dynamic, impressionistic (and cleverly titled) book, Sentilles focuses on language and images-particularly photography-and considers what role they play in peace and war. Eschewing a traditional narrative, Sentilles focuses on two men-one a World War II conscience objector who makes violins, and the other an Abu Ghraib prison guard who paints detainee portraits. In brief, delicately layered pieces rather than a narrative, Sentilles has created a collage that explores art, violence, and what it means to live a principled life."--The National Book Review "It's the kind of book that, after reading just half, you have to stop and catch your breath, because reading it changes you, not just in terms of what you know-it changes the way you think and how you feel-so much so that, halfway in, I wanted to go back and start again because I felt I was already a different person to the person I was when I began."--Turnaround "Sentilles delivers a learned, poetic, and interdisciplinary assessment of the ways in which the photographic image has been abused and weaponized, while also suggesting ways in which the arts can help serve as an antidote to this problem."--Publishers Weekly "Sentilles assembles the case for art as a weapon against weapons. It's a premise that may sound painfully idealistic, but to dismiss the book on that basis is to miss a thoughtful conversation with an author whose eyes are wide open. Sentilles is willing to interrogate her own beliefs, on the page and in life."--The Australian "A broad work of creative nonfiction in the tradition of Maggie Nelson or Annie Dillard's For the Time Being that melts memoir, cultural criticism, and research-based reportage together . . . a wide-ranging collection of cultural fragments created by war, including, ultimately, the book itself."--The Rumpus "[A] lyrical meditation on art and artists as witnesses to war, terror, and other dark hallmarks of our time . . . That war is destructive and displacing is well-known; that it yields accidental moments of beauty is, too, but Sentilles has a good eye for those arresting glints."--Kirkus Reviews "It's not often that a book's description can double as its blurb, but 'A would-be priest decided not to become one and instead wrote a book on how art and metaphor condition us to accept violence' comes damn close. Draw Your Weapons is a unique and necessary book that makes a passionate, thought-stoking argument."--John Jeremiah Sullivan, author of Pulphead "Now more than ever, the world needs a book like Draw Your Weapons. With mastery, urgency, and great courage, Sarah Sentilles investigates the histories of art, violence, war, and human survival. In her haunting and absorbing narrative, the act of storytelling itself becomes a matter of life and death."--Ruth Ozeki, author of A Tale for the Time Being "With a stunning weave of ideas and images, Sarah Sentilles shows us the world we've broken, and she shows us how soldiers, prisoners, artists, thinkers--all of us--are, piece by piece, repairing it. Fearless, stirring, rhythmic, this book pulses with energy and is full of insights, dark yet ultimately hopeful."--Nick Flynn, author of Another Bulls*** Night in Suck City "Draw Your Weapons is as much about peace as it is about war; it is as much about life as it is about death. Sarah Sentilles, with her passionate, clear-eyed prose and her brilliant, generous mind, confronts us with the realities of standing idly by in a world that urgently needs voices of peace and reconciliation."--Emily Rapp, author of The Still Point of the Turning World "A beautiful, haunting book so original that it is a genre unto itself--a poem, a sermon, a polemic, a memoir, a narrative . . . I won't be able to think of our era of constant conflict without recalling Sentilles's lessons, her imagery, and her prophetic voice."--Franklin Foer, author of How Soccer Explains the World
If the item details above aren’t accurate or complete, we want to know about it. Report incorrect product info.