Drive Through the Night - by L M Browning (Paperback) 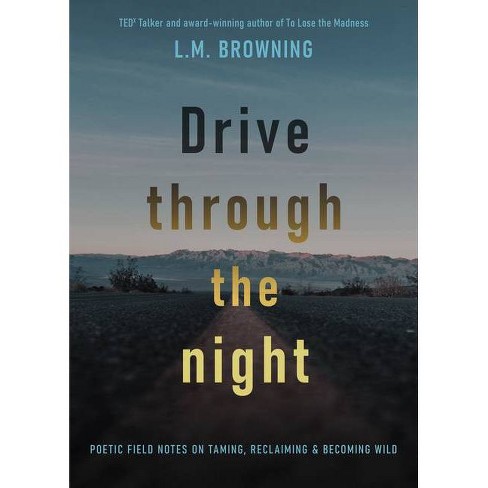 Following the release of her micro-memoir, To Lose the Madness, and the TEDx Talk at Yale University based on her life, Browning returns from a six-year poetic silence with Drive through the Night--a collection following the trail of this orphan-turned-vagabond who left behind the white picket fence for the open range and open road.

Following the release of her micro-memoir, To Lose the Madness, and the TEDx Talk at Yale University based on her life, Browning returns from a six-year poetic silence with, Drive through the Night.

Raw, gritty, lonesome, and stunningly authentic--we pick up Browning's trail a mid-life as the poet reflects on her journey through her major relationships, both with lovers and self.

The arc of these poems traces the poet's journey of overcoming and rebecoming while simultaneously set against the iconic backdrop of the American Southwest. In her words, "These poems and ponderings were written across the nights--while traveling the distance between who I was expected to become and who I authentically (irrevocably) am."

In Drive Through the Night, we follow the trail of an orphan-turned-vagabond who left behind the white picket fence for the open range and open road.

"A laconic, beautiful, and deeply insightful account about coping with loss." -Kirkus Reviews

"Browning brings us inside the disoriented unfolding of a life taking new shape after trauma. This is not a 'tie a neat bow around it' trauma and recovery story with a too-simple happy ending, but a messy, honest look at a life that will never be the same." -Lilly Dancyger, author of Hunted: A Memoir of Art and Addiction and Deputy Editor of Narratively

"Impressively candid and articulate, extraordinarily honest and insightful, exceptionally well written, organized and presented, To Lose the Madness: Field Notes on Trauma, Loss and Radical Authenticity is an inherently compelling read from cover to cover. Thoughtful and thought-provoking from first page to last, To Lose the Madness is unreservedly recommended for personal reading lists, as well as community and academic library collections." -Midwest Book Review, *Reviewer's Choice

"In this spellbinding book, poet and novelist Browning spares no detail in telling the story of her descent into profound grief as one loss piled upon another. Though small, this effective and plainspoken memoir is densely packed with tales of harrowing experiences that require emotional, intellectual, and spiritual investments on the part of the reader. Browning's journey of recovery will be of help to anyone looking for courage in difficult times." -Publishers Weekly

"Browning's essay explores the confluence of natural and interior landscapes in a manner both beautiful and searing."-Foreword Reviews, {5 Stars}

(L.M.) Leslie M. Browning is the award-winning author of twelve titles. She grew up in the small fishing village of Stonington, Connecticut. In her writing, Browning explores the confluence of the natural landscape and the interior landscape. She is a convergence of her flannel-clad New England roots and the wide-sky, high-desert of the Southwest. Over the course of her career to date, Browning has garnered several awards, including: 5 Pushcart Prize nominations, 2 Foreword Reviews, Awards, and the Nautilus Gold Medal for Poetry. In 2011, she founded Homebound Publications & Divisions, which has gone on to become a leading independent publisher in the country. She has served two terms on the Board of Directors for the Independent Book Publisher's Association, is a Fellow with the International League of Conservation Writers, and recently became a Tree Ambassador with One Tree Planted. Following the release of her micro memoir, To Lose the Madness in 2018 Leslie was invited to present at Yale University's TEDx Conference entitled, Uncharted, to share her own journey with successive trauma and search for transcendence in her talk, Writing on Life. Browning holds an degree in Philosophy from the University of London and a Liberal Bachelor or Arts focusing on English, Psychology, and Digital Media from Harvard University. A vagabond-turned-homesteader, Browning is carving out a farm in the Berkshire mountains and holds a position at the press; main office in Northampton, MA. When not writing, or publishing the work of indie authors, she is roaming the mountains . . . which are ever-calling.
If the item details above aren’t accurate or complete, we want to know about it. Report incorrect product info.