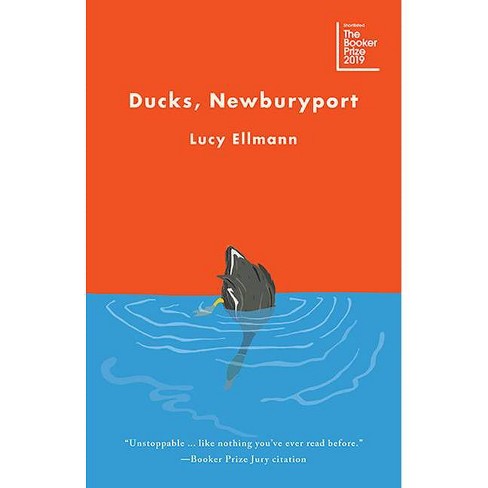 "Lucy Ellmann's Ducks, Newburyport offers a radical literary form and voice. Dense to look at, challengingly epic, the novel is built around one Ohio housewife's monologue, flowing with dazzling lightness and speed. The detritus and maddening complexity of domesticity unfold in one breath, over a thousand pages. Shards of film plot and song collide with climate change anxiety; the terrors of parenting, healthcare and shopping lists wrestle with fake news and gun culture. The narrator reverberates with humour, wordplay and political rage. The writing resonates like a dissonant yet recognisable American symphony for massive forces, with riffs and themes folding back, proliferating, and gradually cohering. Its one long sentence occasionally breaks to simply describe a mountain lioness and her cubs: a meditation on nurture that will be wrapped into the violence of the ending. Lucy Ellmann has written a genre-defying novel, a torrent on modern life, as well as a hymn to loss and grief. Her creativity and sheer obduracy make demands on the reader. But Ellmann's daring is exhilarating ― as are the wit, humanity and survival of her unforgettable narrator." --Booker Prize Judge, Joanna MacGregor

"Lucy Ellmann's Ducks, Newburyport offers a radical literary form and voice. Dense to look at, challengingly epic, the novel is built around one Ohio housewife's monologue, flowing with dazzling lightness and speed. The detritus and maddening complexity of domesticity unfold in one breath, over a thousand pages. Shards of film plot and song collide with climate change anxiety; the terrors of parenting, healthcare and shopping lists wrestle with fake news and gun culture. The narrator reverberates with humour, wordplay and political rage. The writing resonates like a dissonant yet recognisable American symphony for massive forces, with riffs and themes folding back, proliferating, and gradually cohering. Its one long sentence occasionally breaks to simply describe a mountain lioness and her cubs: a meditation on nurture that will be wrapped into the violence of the ending. Lucy Ellmann has written a genre-defying novel, a torrent on modern life, as well as a hymn to loss and grief. Her creativity and sheer obduracy make demands on the reader. But Ellmann's daring is exhilarating--as are the wit, humanity and survival of her unforgettable narrator." --2019 Booker Prize Jury Citation

"This book has its face pressed up against the pane of the present; its form mimics the way our minds move now toggling between tabs, between the needs of small children and aging parents, between news of ecological collapse and school shootings while somehow remembering to pay taxes and fold the laundry...The capaciousness of the book allows Ellmann to stretch and tell the story of one family on a canvas that stretches back to the bloody days of Western expansion, but its real value feels deeper -- it demands the very attentiveness, the care, that it enshrines."--Parul Sehgal, New York Times

"Brilliantly ambitious...At times there's such fury to these ruminations that the book seems to shift into direct cultural critique; at other times it all seems simply part of the story...The lioness offers a foil, a figure of natural instinct and maternal courage set against the narrator's culturally determined fears and insecurities...This is a novel, but it is also, fundamentally, a very long and meaningful list...as accumulative, as pointed, as death-addled, as joyous, as storied, as multitudinous and as large as life." --Martin Riker, New York Times Book Review

"Ellmann captures the pathos of the everyday, how one might use pie crusts and film synopses to dam in pain. She also allows the narrator's avoidance to suggest a greater amnesia, an American reluctance to face its past and its ongoing brutalities. The narrator lives in a country whose mythic propositions hang in the same limbo as her run-on sentence...Ellmann's commitment to compilation and description suggests a resistance to hierarchies. It also flickers with tenderness. The time and care that she lavishes on her narrator seem like their own form of political speculation--that every individual is owed an unending devotion, and that such devotion, applied universally, might change the fate of the world." --New Yorker

"Effervescent...as the book closes in on the thrilling -- and unexpected -- conclusion, the disparate strands tossed out at the novel's onset gleam with import...Ducks, Newburyport directs us back to the language on the page, so we become hyper-aware of it...Ellmann has made a case that a richer, less regimented language leads to a more vibrant and capacious mind, and has thus crafted the entrancing Ducks, Newburyport into a celebration of all that words, and the minds they build, can contain." --Chicago Review of Books

"A sublime literary enactment of how guilt, grief, rage, regret, compassion, and every other emotion swirls and ebbs in unbalanced defiance of rational logic...The very form of Ducks, Newburyport is perhaps the ultimate expression of life's absurd disproportionality...The free-associative stream accumulates into a work of great formal beauty, whose distinctive linguistic rhythms and patterns envelop the reader like music or poetry. Equally, it forms a damning indictment on capitalist patriarchy that, in an extraordinary feat from a writer at the height of her powers, never veers within a mile of sanctimony or self-righteousness. If art is measured by how skillfully it holds a mirror up to society, then Ellmann has surely written the most important novel of this era. " --The Paris Review

"Ulysses has nothing on this ... Once you get going, you'll be too absorbed to stop." --Cosmopolitan

"Could possibly turn out to be the most important novel of the decade ... Read Ducks, Newburyport. This is a novel for the idea of America today." --Los Angeles Review of Books

"Eccentric and recursive, its language eschews modernism's tangled poetry for something more recognizably contemporary. The detritus of digital and popular culture is embedded, shard-like, in the mesh of the narrator's ever-unspooling mind...Her heroine's anger burns cleanly, refusing the easy conflagration of self-righteousness. The cumulative effect is devastating. This is a powerful and deeply felt indictment of American moral failure, a fearful, dazzling bloom of conscience...The narrative technique of Ducks, Newburyport is itself a kind of coping mechanism, a grand mimetic achievement. The novel's length is, in the end, something of the point." --The Nation

"There are novels, and then there are extraordinary novels--truly unique, one-of-a-kind, sui generis--terms that are often used as clichés but I assure you not in Lucy Ellmann's case, regarding her eighth novel, Ducks, Newburyport...a truly great American novel that catches our zeitgeist more accurately during the Trump years than anything else I have read...Ellmann has crawled into the horrifying times in which we live and written an explosive story that will engage you on every one of its 1000 pages." --CounterPunch

"It's a book that quite restores our faith in the possibility of literary 'greatness' while questioning what forms such 'greatness' can or should take. It is certainly, in its humane range and weight, a Great American Novel. Is it any good? Oh my word, yes. Reading it at this point in times seems like an act of human solidarity, a commitment to the world of truth and reason." --Literary Review

"Brilliant -- and addictive...There have been comparisons to James Joyce's Ulysses, but Ellmann is in a class by herself." --Associated Press

"Readers need not scoff this giant pie in one gulp. Sampled at regular intervals, it tastes sweeter. The sheer ingenuity of Ms Ellmann's wordplay, the fabulous profusion of her recipes, catalogues and inventories, from a freezer's contents to confectionery brands, imbue every passage with fun as well as a sardonic poetry." --Economist

Ducks, Newburyport is a menacing novel, a masterpiece of precision and endurance. This is the sort of book you'll pick up and be baffled for the first 10 or 20 pages, but by the 30th page, you'll be home." --Thrillist

"Ducks, Newburyport is a complex book about a complicated time. It reads like an outpour of humanity beckoning to be heard." --Electric Literature

"Resplendent in ambition, humour and humanity ... a lifetime of memories hoarded and pored over, like the family heirlooms the narrator and her husband have inherited along with all the joy and desolation contained within them ... In Ducks, Newburyport Ellmann has created a wisecracking, melancholy Mrs Dalloway for the internet age." --Financial Times

"Perhaps the most intensely real depiction of the life of the quotidian mind I've ever witnessed... what Ducks [Newburyport] amounts to is one great trauma diagnosis for the entire country...It's a colossal feat." --The Spectator

"A book about a mother's love, but also about loss and grief, and anxiety dreams about Donald Trump, and despair about mass shootings ... It is also a catalogue of life's many injuries and mishaps ... and of the simple joys and consolations of memory and imagination. [A] triumph." --The Guardian

"A remarkable portrait of a woman in contemporary America contemplating her own life and society's storm clouds ... brilliant." --Publishers Weekly (starred review)

"In Ducks, Newburyport the invisible expropriation of women's domestic labour is tied to the despoiling of the environment and the macho degradation of the public sphere. But this is to suggest the novel can be boiled down to one particular theme, when its entire premise refuses any kind of summary. In reading Ducks, wonder gives way to frustration, which gives way to wonder again, until finishing becomes a kind of contemplative vigil - an exercise in dedication...Ducks is asking us to imagine what a total, unboundaried empathy with another person could feel like." --New Statesman

"This is one of the most bonkers, but absolutely brilliant, novels I have ever read...by turns poignant, funny, repetitive, poetic, banal and wise...this is a brave and bracing book for both author and publisher to have -produced, and in the sheer commitment it demands of the reader is a brilliant antidote to the simplistic realm of clickbait, acronyms and sloganeering that the novel describes and critiques so well. Bravo!" --The Tablet

"A wildly ambitious and totally unique masterpiece of the kind that doesn't frequently appear in contemporary fiction...Once or twice while reading a novel, you might encounter an image in passing that suddenly knocks you out of the book and into a dreamy state, a little detail that jumps out at you and consumes your attention for a moment. This happens so often in "Ducks" that reading the book can be like a collection of immediately interesting objects, like that specific kind of American home so stuffed with objects that every moment is one of discovery. The material culture of American life is splayed across these pages." --Michigan Daily

"A wildly ambitious and righteously angry portrait of contemporary America." --The Observer

"It is a soaring example of how a gifted writer can spin one sentence into a complete, immersive story." --Financial Times