Duel of Fire - (Steel and Fire) by Jordan Rivet (Hardcover) 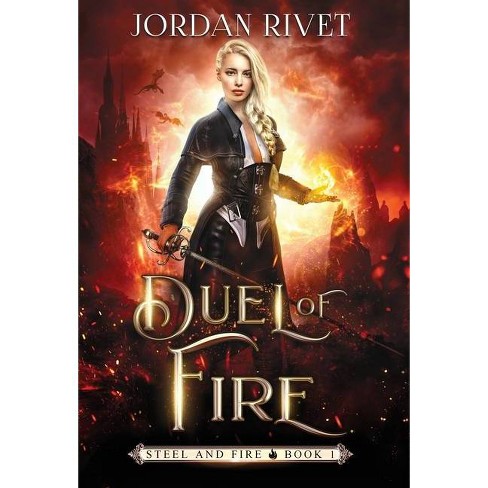 When champion duelist Dara is asked to cross swords with the handsome Prince Siv, she faces her most difficult opponent yet. An epic YA fantasy adventure full of swordplay, magic, and romance!

A champion sword fighter. A handsome prince. A kingdom in peril.

Dara Ruminor is a competitive duelist in Vertigon, where athletes live like kings as long as the crowds love them. She's good with a sword but can't figure out how to charm the spectators like a true champion.

When Dara is asked to train with Prince Siv, the heir to the throne, she faces her most difficult opponent yet. Handsome, charismatic, and utterly infuriating, he refuses to take the sport-or her-seriously.

But someone wants Prince Siv dead, and Dara might be the only one who can protect him. With assassins lurking in the shadows and tensions brewing between the kingdom's magic wielders, Dara and Siv need each other's help with more than just dueling. Skill with a blade might not be enough to save them.

Throne of Glass meets A Knight's Tale in this swashbuckling epic fantasy full of sword fights, assassins, magic, and betrayal.

"An absolutely enthralling book from start to finish." - Amazon Reviewer

"The author's merging of prose and worldbuilding is sublime. I could picture the misty slopes of the Kingdom of Vertigon, where bridges connect three peaks. Dara comes across as focused and dour in her drive to become a duelist. Her perfect foil is the Crown Prince, Siv. Handsome, charming, and laid back, he drives her crazy in more ways than one. His dialog is snappy and witty, and their chemistry pops off the pages." - Fantasy Faction

"Miss Rivet has done something that few others can, she has created a world of her own. We often describe good world building as vibrant, or fantastic, but if we can be honest, Miss Rivet has pushed past much of that and created something with which we have fallen in love. The world of Steel & Fire is so full of life, and we get so many diverse views, that it is likely one of the most complete fantasy worlds we have ever encountered." -Fantasia Reviews