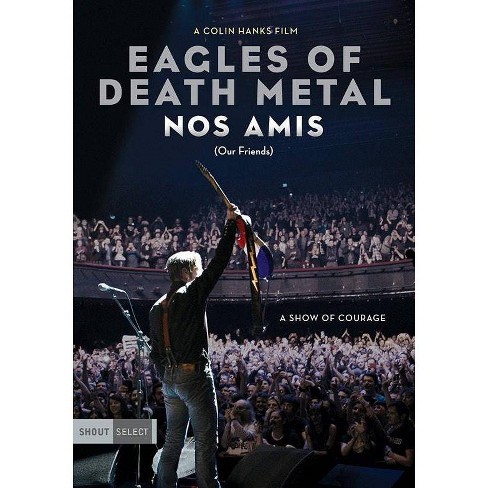 $14.29
MSRP$19.98
no reviews yet
be the first!be the first! ratings
Shipping
Free standard shipping with RedCard
Help us improve this page

The November 13, 2015 terrorist attack in Paris claimed 130 lives around the city â€” 89 of them at the Eagles of Death Metalâ€™s Bataclan Theatre concert.


Eagles of Death Metal: Nos Amis (Our Friends) spotlights the American rock band as they recount their experiences before and after the tragic events. The film explores the deep bonds between band co-founders Jesse Hughes and Josh Homme (also a member of Queens of the Stone Age), as well as the intense connection the band has always had with its devoted fans, which moved them to return to Paris to perform once again in February 2016.


Directed by Colin Hanks and produced by Live Nation Productions and Company Name, the documentary is a portrait of resilience in the face of unspeakable horror and a life-affirming coda to the events of November 13.


The documentary profiles the intense relationship between Hughes and Homme, which began in childhood and has always been an inspiration for the band. After detailing the origins of their friendship in Palm Springs, California and the genesis of the band, Hughes, Homme and fellow band members Dave Catching, Matt McJunkins and Julian Dorio provide harrowing first-person details about that day in Paris, when they desperately tried to save their lives, while Homme (who had stayed behind in the States) received shocking reports back home.


Jesse Hughes and Josh Hommeâ€™s close friendship, coupled with a profound sense of responsibility to help the Bataclan survivors cope with their physical and emotional wounds, inspired the band to return to Paris, first to perform with U2 at a rescheduled concert three weeks after the attacks, and later, to finish its own Paris show at the Olympia concert hall. It became clear to Hughes and the rest of the band that they must come back to Paris, not just for their own state of mind, but for â€œNos Amisâ€ â€” their fans and fellow Bataclan survivors.


Eagles of Death Metal: Nos Amis (Our Friends) includes accounts of fans who survived the Bataclan attack, extensive behind-the-scenes footage of the band and interviews with Bono and The Edge of U2.