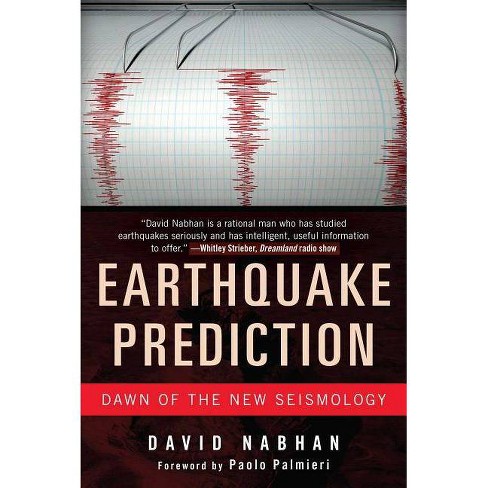 $10.99
MSRP$22.99
no reviews yet
be the first!be the first! ratings
Shipping
Free standard shipping with RedCard
Help us improve this page

Praise for David Nabhan and his theory: "Nabhan's theory deserves to be taken note of."
--Dr. Kate Hutton, chief seismologist, California Institute of Technology "This is simple but brilliant observation, followed by reasonable applications; impossible to dismiss as coincidence."
--Dr. Cort Stoskopf, Popular Science Radio "If you believe that predicting earthquakes is impossible than everything you think you know about it could be wrong."
--Thom Hartmann, RT Television "What if I were to tell you that nearly every single deadly Southern Californian earthquake in the past happened at dawn or at dusk and during a new or full moon?"
--Paul Magers, news anchor, CBS 2, Los Angeles "If proven this would be the 'Holy Grail' of seismology."
--Conan Nolan, KNBC News, Los Angeles "Nabhan's forecasts nailed three of the largest seismic events on the West Coast in 1996."
--Erin Aubrey, staff writer, Los Angeles Weekly "There you go; seems to me you're right."
--George Noory, Coast to Coast AM "David Nabhan is the man who says he's worked out how to predict earthquakes in Southern California... quakes happen during either a new or a full moon, and within three hours of dawn or dusk."
--London Daily Mail "This is the first guy to go back and check what all those seismic events have in common? The idea that it just took somebody to say 'let's look and see if there's a pattern' is pretty shocking to me."
--Scott Cox, KERN TV/Radio "While some studies indicate that tidal effect may have an effect on smaller quakes, there's no evidence they have an effect on bigger quakes."
--Dr. Tom Jordan, director, Southern California Earthquake Center "We've got a guy coming on who predicted a quake the last time on the show; I don't know what to make of this earthquake prediction stuff."
--Howard Stern, Howard Stern Show "Ladies and gentlemen, you read it here first: Nabhan's near dead-on calculation for the August 20 shaker near Wrightwood."
--Theresa Moreau, Pasadena Weekly "Whether or not Nabhan can predict earthquakes, he certainly predicts seismic skepticism."
--David Moye, America Online News "It's such a no-no. Seismologists won't even talk about it!"
--Kate Delaney, America Tonight "Nabhan is confident enough in his work to urge government leaders to take action and prepare for major tremors during certain periods of time."
--Andrew Ireland, World Net Daily "There's a huge difference between a prediction and an advisory. But the hardships unprepared Valley residents face if the Big One hits? That's a promise."
--Jeff Jardin, Modesto Bee "It's simply mind-boggling that with the evidence Nabhan has placed in front of scientific and governmental authorities over the last two decades, that they are still reluctant to move forward to at least consider the advisory system he proposes. Simply mind-boggling."
--Rob Mc Connell, The 'X' Zone radio show "What's wrong with trying to warn people? How does this hurt anyone?"
--Wendy Snyder, WGN, Chicago "We're not interested in anyone saying the sky's falling, but David Nabhan is a rational man who has studied earthquakes seriously and has intelligent, useful information to offer."
--Whitley Strieber, Dreamland radio show "An intriguing and fascinating book. Nabhan's simply asking us to look at the data, the way science used to be done. Here's the evidence, you look at it and figure out what it means."
--Dave Bowman, KFIV, Modesto "David Nabhan is no stranger to controversy for his belief that we can predict earthquakes to some degree. His theory is pinned to gravitational tides, and these are immense forces!"
--Faune Riggin, Morning News, KZIM & KSIM, Southeastern Missouri "This is a no-brainer for me; facts are facts."
--Rick Wiles, Trunews "His ideas warrant better scrutiny, because maybe there is a grain of truth in his hypotheses and all of us deserve the best chance to survive the next Big One."
--David Fox, Anchorage Press "This is the multi-billion dollar question. Does David Nabhan have the answer?"
--David Page, KSRO, San Francisco Bay Area
If the item details above aren’t accurate or complete, we want to know about it. Report incorrect product info.