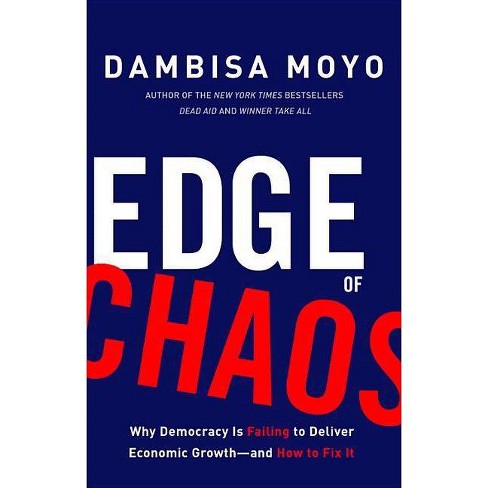 From an internationally acclaimed economist, a provocative call to jump-start economic growth by aggressively overhauling liberal democracy Around the world, people who are angry at stagnant wages and growing inequality have rebelled against established governments and turned to political extremes. Liberal democracy, history's greatest engine of growth, now struggles to overcome unprecedented economic headwinds -- from aging populations to scarce resources to unsustainable debt burdens. Hobbled by short-term thinking and ideological dogma, democracies risk falling prey to nationalism and protectionism that will deliver declining living standards. In Edge of Chaos, Dambisa Moyo shows why economic growth is essential to global stability, and why liberal democracies are failing to produce it today. Rather than turning away from democracy, she argues, we must fundamentally reform it. Edge of Chaos presents a radical blueprint for change in order to galvanize growth and ensure the survival of democracy in the twenty-first century.

Edge of Chaos represents an important warning that America's global clout and the global order itself are 'under threat.'--National Review

It is studded with factoids and research findings that readers will no doubt find interesting...The best part is her warning that the free-market capitalism that has lifted millions of people out of poverty in the past half-century may be facing severe tests.--Wall Street Journal

The author's program of remedy is provocative and of much interest to advocates of growth. Moyo clearly identifies systemic problems that the democracies-or what's left of them-would do well to address.--Kirkus Reviews

These ideas arrive as something of a relief...--Financial Times

Dambisa Moyo is a prize-winning economist. The author of New York Times bestsellers Winner Take All and Dead Aid, she was named one of the 100 Most Influential People in the World by Time Magazine. Moyo is a regular contributor to the Wall Street Journal and Financial Times. She lives in New York City.
If the item details above aren’t accurate or complete, we want to know about it. Report incorrect product info.