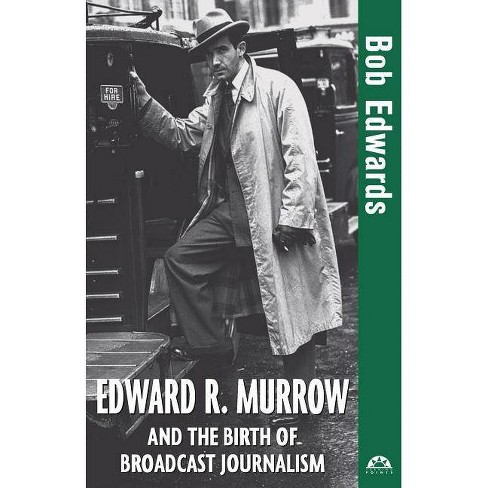 * Host of NPR's Morning Edition and author of Fridavs with Red: A Radio Friendship, Edwards paints a colorful portrait of pioneer broadcast journalist Edward R. Murrow. An idealistic educator, Murrow started reporting for the Columbia Broadcasting System (CBS) during the late 1930s and was assigned to Europe. Along with other foreign correspondents, he established the groundbreaking concept of providing nightly news ""roundups"" to the listeners back home in America. Long before CNN and embedded journalists existed, Murrow was determined to let his audience experience the events of World War II as they unfolded, as when he joined the Royal Air Force on a mission to drop bombs on Berlin. By incIuding excerpts from transcripts of Murrow's reports, the author lets Murrow speak for himself, giving the reader a sense of his insightfulness and his gift for words. As Edwards emphasizes throughout the book, Murrow continued his crusade to provide quality educational material to the public even when he moved over to television. On the whole this succinct and concise biography, as part of the publisher's Tuming Points series of short works about famous people and events, offers an introduction to Murrow's fascinating career and to the history of broadcast journalism. Suitable for all libraries, especially for high school media centers. --Donna Marie Smith, Palm Beach Ctv. Lib. Syst. FL (Library Journal, May 1, 2004)

Edwards, who has hosted NPR's Morning Edition since 1979 (though he's just announced his retirement from that post, as of April 30 of this year), examines the charismatic career and pioneering efforts of renowned newsman Murrow for Wiley's Turning Points series. Murrow's broadcasting innovations were indeed significant turning points. Joining CBS in 1935, when radio news usually focused on such preplanned events as parades and flower shows, Murrow ran the network's European Bureau by 1937 and became a celebrity in 1940 with his stunning rooftop broadcasts of the London Blitz: "Listeners in comfortable living rooms all across the United States were hearing Britons being bombed in real time." Creating a cadre of WWII correspondents, Murrow flew on 25 combat missions, delivering dramatic reports on everything from the "orchestrated hell" of Berlin to the liberation of Buchenwald's "living dead." Mainly remembered for its famed 1954 attack on Joseph McCarthy, Morrow's groundbreaking TV show See It Now (1951-1958) put field produce rs on location, offering live remotes, split screens, original film footage and unrehearsed interviews at a time other TV news featured only a reading of headlines. Edwards delineates a brief but striking portrait of a "driven man," a fearless fighter who set such a high standard for himself and others that he became a legend, leaving a lasting impact in newsrooms even after his death in 1965. The book includes excerpts from memorable Murrow broadcasts throughout. (May 7)
Forecast: With more than 10 Turning Points titles now in print, readers may begin to spot this series by its distinctive, standardized cover design. This one is sure to benefit from Edwards's 14-city author tour. Other forthcoming titles in the series include Sir Martin Gilbert on D-Day. (Publishers Weekly, April 5, 2004)