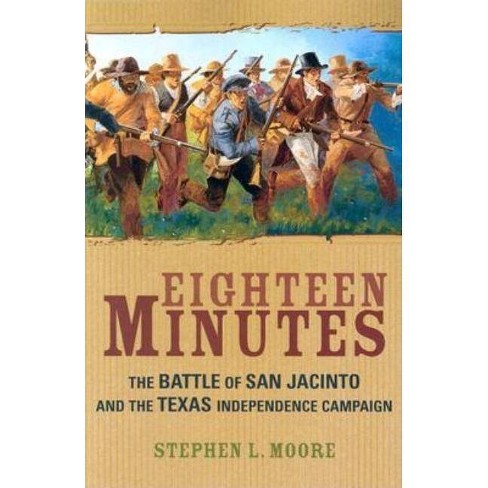 It was the decisive eighteen-minute Battle of San Jacinto where the famous words "Remember the Alamo!" were first shouted. In Eighteen Minutes, Stephen L. Moore describes the momentous battle that established the independent Lone Star Republic. Told largely through the eyes of the participants, the recollections included here are words from over 120 Texan and Mexican soldiers. The book follows General Sam Houston as he takes command of the Texas Volunteers to lead them to victory six weeks after the fall of the Alamo at San Jacinto, the town since known as the birthplace of Texas liberty. The battle and its aftermath are covered in great detail and include the capture of Santa Anna, the "Yellow Rose" controversy, and the death of a woman on the battlefield. Special features include rosters of all Texans involved in the battle, a list of casualties, and the details on other companies involved in the campaign. Eighteen Minutes is a comprehensive history of how revenge for the defeat of the Alamo was at last achieved.

A painstaking and precise account of the San Jacinto campaign. A definitive work on the Texas campaign following the Alamo and Goliad. This is not a Texas hero-worshipping or Texas-bashing book. It is a detailed work of history and, like all history, it is neither black nor white. No book collection of the Texas Revolution should be considered complete without this book.--J. Osborne "Gainesville Daily Register "

It's a testament to Moore's skill as a military historian that he's able to make tertiary military taks. Interesting enough to warrant the couple of hundred dense pages he devotes to these not inherently fascinating tasks. Eighteen Minutes is a fairly old-fashioned military story that revels in the story itself, rather than any kind of heavy, acedemically oriented interpretation of it. Military history buffs will justifiably appreciate its lack of pretension and obsessive attention to detail.--Jimmy McWilliams "Austin American Statesman "

Stephen L. Moore, a sixth generation Texan, was born twenty miles from the San Jacinto battlegrounds, where two of his ancestors fought for Texas independence. Author of three previous books on Texas and military history, Steve; his wife, Cindy; and their two daughters live near Dallas in Lantana, Texas.
If the item details above aren’t accurate or complete, we want to know about it. Report incorrect product info.