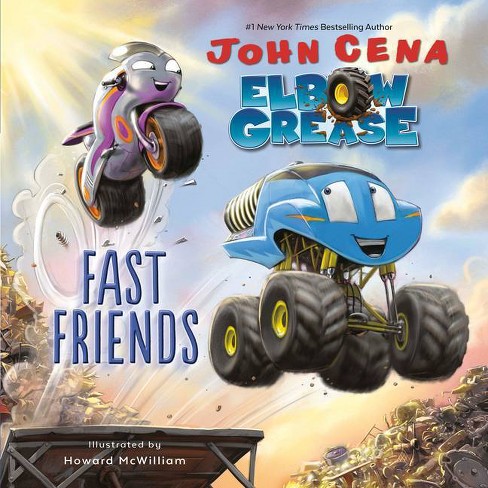 Monster truck Elbow Grease and his brothers meet a monster-cycle, Chopper, and hope to be her friend--until she proves to be faster, smarter, and more capable than they are.

There's a new truck on the block in John Cena's third picture book in the #1 New York Times bestselling Elbow Grease series, featuring the truck who never gives up! Elbow Grease and his monster truck brothers are hardly prepared when they meet Chopper, a speedy, purple monster motorcycle. Chopper wants to be friends with the brothers, who are more than impressed with her epic skills! But when the trucks start to get jealous of her talents, they must learn to overcome their frustrations and welcome a new friend into the group--especially when it's up to them to work together to save the day! Elbow Grease and gang are back in another rip-roaring adventure, in John Cena's third installment in the series!

Praise for the Elbow Grease series: "[John Cena] is leading kids to a better future by creating characters who teach readers about having core values. He inspires kids to do more." -Newsday

JOHN CENA is a #1 New York Times bestselling author, multifaceted entertainer, and dedicated philanthropist. A longtime WWE superstar, his films include Ferdinand (2017); F9, the next installment of the Fast and the Furious series (2021); The Suicide Squad (2021); and its spinoff TV show, Peacemaker (2021). Inspired by Richard Scarry--one of his favorite children's book creators--John is the author of the Elbow Grease series of picture books. Follow @JohnCena on Twitter, Instagram, or Facebook. HOWARD McWILLIAM is the illustrator of eight picture books. His first, I Need My Monster, won seven state young readers' prizes, and has been translated into five languages. His other works include the popular What if You Had series; Hey, That's My Monster; Schmelf the Hanukkah Elf; and When a Dragon Moves In. He lives in the UK with his wife and three young sons.
If the item details above aren’t accurate or complete, we want to know about it. Report incorrect product info.