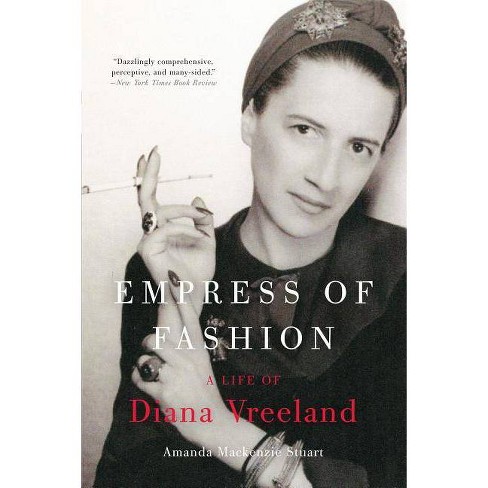 "A fearless innovator who inspired designers, models, photographers, and artists, Diana Vreeland, the famed editor of Vogue, reinvented the way we think about style. In this first full-length biography, Amanda Mackenzie Stuart tells the story of Vreeland's childhood on New York's Upper East Side, her first job at Harper's Bazaar, her renowned post at Vogue, and her role as special consultant to the Costume Institute at the Metropolitan Museum of Art. Empress of Fashion is an intimate and surprising look at an icon who made a lasting mark on the world of couture."--Provided by publisher.

Diane von Furstenberg once called Diana Vreeland a beacon of fashion for the twentieth century. Now, in this definitive biography by Amanda Mackenzie Stuart, is the story of the iconic fashion editor as you've never seen her before. From her career at the helms of Harper's Bazaar and Vogue, to her reign as consultant to the Costume Institute at the Metropolitan Museum of Art, Vreeland had an enormous impact on the fashion world and left a legacy so enduring that must-have style guides still quote her often wild and always relevant fashion pronouncements.

With access to Vreeland's personal material and photographs, critically acclaimed biographer Amanda Mackenzie Stuart has written the ultimate behind-the-scenes look at Diana Vreeland and her world--a jet-setting social scene that included Coco Chanel, Elsa Schiaparelli, Yves Saint Laurent, Hubert de Givenchy, Oscar de la Renta, Lauren Bacall, Penelope Tree, Lauren Hutton, Andy Warhol, Mick and Bianca Jagger, and the Kennedys. Filled with gorgeous color photographs of her work, Empress of Fashion: A Life of Diana Vreeland is an elegant and fascinating account of one of the most revered tastemakers of the 20th century.

A fearless innovator who inspired designers, models, photographers, and artists, Diana Vreeland, the famed editor of Vogue, reinvented the way we think about style. In this first full-length biography, Amanda Mackenzie Stuart tells the story of Vreeland's childhood on New York's Upper East Side, her first job at Harper's Bazaar, her renowned post at Vogue, and her role as special consultant to the Costume Institute at the Metropolitan Museum of Art. Empress of Fashion is an intimate and surprising look at an icon who made a lasting mark on the world of couture.

"This new in-depth biography traces not only Vreeland's career as an influential fashion editor, but also her early life as an unhappy child, but ultimately imaginative, fearless and hard-working young lady. For someone looking for a good, interesting and inspiring read rather than just a pretty photography book."--Fashionista, The 25 Best Books for the Fashion Obsessed

"[EMPRESS OF FASHION] stands out for its un-gushy, arm's-length observation of a woman who used any means possible-including outrageous lies-to create the mise en scène for her life."--Wall Street Journal

"A sympathetic biography...a cohesive, well-researched volume...Vreeland is a fascinating figure whose life spanned almost the entire twentieth century, of which the author takes dizzying, delightful advantage."--Booklist

"A tasty and erudite study of a complicated woman and her turbulent and colorful cultural life and times...Fashion icon Diana Vreeland and her psyche and cultural milieu are superbly deconstructed by Amanda Mackenzie Stuart."--Publishers Weekly

"An insightful new biography...Stuart uses Vreeland's vulnerable roots to create a sympathetic portrait of Diana...Vreeland's life story is oddly inspiring...Why don't you give a copy of EMPRESS OF FASHION to your favorite fashionista this holiday season?"--BookPage

"An intelligent account of the life and accomplishments of legendary Vogue editor-in-chief, Diana Vreeland...A richly detailed and well-researched biography of a fashion icon"--Kirkus Reviews

"Meticulously researched...Stuart digs deep into how Vreeland created herself...and catches the breathlessness of the editor who had a profound influence on magazines 80 years after beginning her career."--Boston Globe

"The first comprehensive bio of legendary magazine editor Diana Vreeland is a can't-put-down read. Stuart separates facts from "faction" (Vreeland's term for her dramatic exaggerations) and gets to the core of the fashion pioneer."--People

"a rare and welcomed view of her private life which was so often overlooked in favor of the glossy and more obvious parts of her life, including all the glamour and bon mots she was so free with... Would I recommend EMPRESS OF FASHION? . . . hell yes!"--New York Journal of Books

"A painstakingly researched depiction of the imperious, mesmerizing virtuoso who wandered onto the fashion stage and stole the show...a biography of fabulous fact."--New York Daily News

"An illuminating biography."--O, the Oprah Magazine

"Assiduously but (very much unlike her subject) unassertively, Amanda Mackenzie Stuart makes a case for Diana Vreeland as one of the 20th century's premier figures. When you finish reading EMPRESS OF FASHION you're convinced Cleopatra could not have been more fascinating."--Bloomberg News

"It is the biography (the Vreeland book) rather than the memoir (the Coddington volume) that offers the most insight into the deep motivation behind the making of such a career and carefully examines the occasional ugliness of a lifetime committed to making things externally beautiful."--New Republic

"It's scholarly but never dry - how can it be, with drop-ins by Josephine Baker, a young Lauren Bacall, Veruschka and Andy Warhol? - and an insightful, inspiring look at a complicated woman."--NJ Star Ledger

"This is Diana Vreeland's first full-length biography...A cottage industry has emerged around DV...This perhaps has as much to do with how much more seriously we take fashion nowadays as with how quaintly delicious we now find Vreeland's borderline Dadaist sensibility..."--Village Voice

"With EMPRESS OF FASHION: A LIFE OF DIANA VREELAND Stuart does more than celebrate and bear witness. She seeks to explain, to parse, and to ultimately decipher the woman behind the strokes of red rouge and dyed-black hair... Stuart paints a nuanced portrait of a strange and tantalizing woman."--Daily Beast
If the item details above aren’t accurate or complete, we want to know about it. Report incorrect product info.