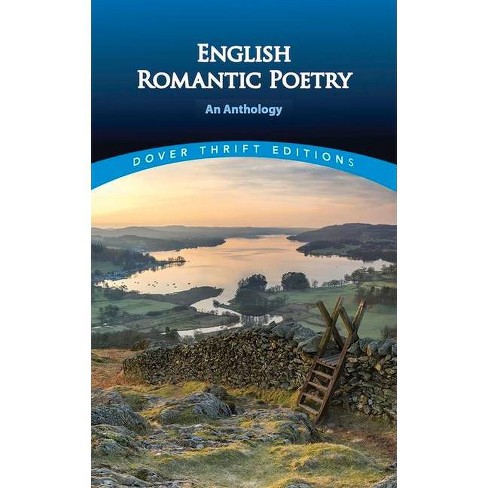 This volume contains a rich selection of poems by England's six great Romantic poets: William Blake, William Wordsworth, Samuel Taylor Coleridge, Lord Byron, Percy Bysshe Shelley, and John Keats. Encompassing a broad range of subjects, styles, and moods, the emphasis of these late 18th and early 19th century poets is imagination and individual experience, as well as a preoccupation with such themes as nature, death, and the supernatural.

Encompassing a broad range of subjects, styles, and moods, English poetry of the late eighteenth and early nineteenth centuries is generally classified under the term "Romantic," suggesting an emphasis on imagination and individual experience, as well as a preoccupation with such theme as nature, death, and the supernatural.
This volume contains a rich selection of poems by England's six greatest poets: William Blake (24 poems, including "The Tyger" and "Auguries of Innocence"), William Wordsworth (27 poems, including "Ode: Intimations of Immortality" and "I wandered lonely as a cloud"), Samuel Taylor Coleridge (10 poems, including "The Rime of the Ancient Mariner" and "Kubla Khan"), Lord Byron (16 poems, including "The Prisoner of Chillon" and selections from Don Juan and Childe Harold's Pilgrimage), Percy Bysshe Shelley (24 poems, including "Ode to the West Wind" and "Adonis"), John Keats (22 poems, including all the great odes, "Isabella," and "The Eve of St. Agnes").
For this edition, Stanley Appelbaum has provided a concise Introduction to the Romantic period and brief commentaries on the poets represented. The result is a carefully selected anthology that will be welcomed by lovers of poetry, students, and teachers alike.

Stanley Appelbaum served for decades as Dover's Editor in Chief until his retirement in 1996. He continues to work as a selector, compiler, editor, and translator of literature in a remarkable range of languages that includes Spanish, Italian, French, German, and Russian.
If the item details above aren’t accurate or complete, we want to know about it. Report incorrect product info.