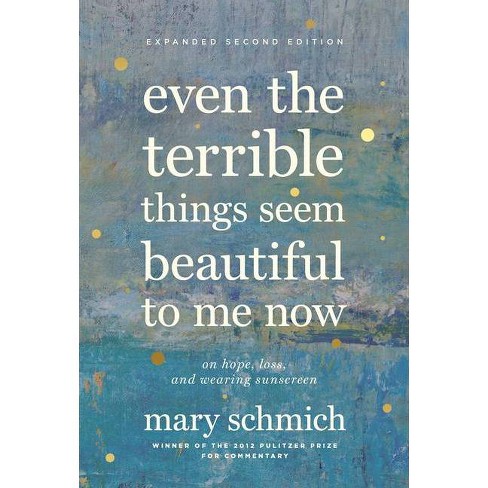 Over the last two decades, Mary Schmich's biweekly column in the Chicago Tribune has offered advice, humor, and discerning commentary on a broad array of topics including family, milestones, mental illness, writing, and life in Chicago. Schmich won the 2012 Pulitzer for Commentary for "her wide range of down-to-earth columns that reflect the character and capture the culture of her famed city." This second edition--updated to include Schmich's best pieces since its original publication--collects her ten Pulitzer-winning columns along with more than 150 others, creating a compelling collection that reflects Schmich's thoughtful and insightful sensibility. The book is divided into thirteen sections, with topics focused on loss and survival, relationships, Chicago, travel, holidays, reading and writing, and more. Schmich's 1997 "Wear Sunscreen" column (which has had a life of its own as a falsely attributed Kurt Vonnegut commencement speech) is included, as well as her columns focusing on the demolition of Chicago's infamous Cabrini-Green housing project. One of the most moving sections is her twelve-part series with US District Judge Joan Lefkow, as the latter reflected on rebuilding her life after the horrific murders of her mother and husband. Schmich's columns are both universal and deeply personal. The first section of this book is dedicated to columns about her mother, and her stories of coping with her mother's aging and eventual death. Throughout the book, Schmich reflects wisely and wryly on the world we live in, and her fond observances of Chicago life bring the city in all its varied character to warm, vivid life.
If the item details above aren’t accurate or complete, we want to know about it. Report incorrect product info.