Everyone Is Tulip - by Dave Baker (Paperback) 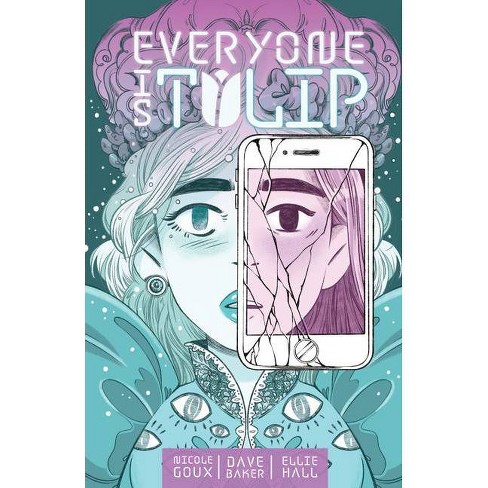 "Follow the journey of Becca, a young would-be actress, as she attempts to navigate the seedy underworld of Hollywood. What she doesn't know is that she is about to be conscripted into the even more sinister ecosystem of Internet performance art videos. This woman's dreams of making it on the Big Screen rapidly evolve into something decidedly stranger"--

One of Library Journal's best graphic novels of 2021! Centered around the aspiring actress Becca and her whirlwind rise to stardom, Everyone is Tulip is an original graphic novel that explores what it means to be a star in a generation that places more attention and value on YouTube clips and memes than it does Hollywood celebrities. Becca Harper lands an acting role she didn't think would go anywhere, and suddenly finds herself flung into a 15 minutes of fame that sees her likeness not up in lights, but in memes, reaction videos, and even conspiracy theories. Donning the guise of Tulip for an experimental artsy video, directed by an affluent jerk (that she somehow ends up dating), Becca's dreams seem to have come true when her persona becomes the talk of the internet. With a sudden army of fans, complications arise when Becca begins to question whether or not she has the right to consider herself a star. Created by indie comic all-stars Dave Baker (Star Trek: Voyager - Seven's Reckoning, F*ck Off Squad, Night Hunters) and Nicole Goux (Shadow of The Batgirl, F*ck Off Squad, Jem and The Holograms: Dimensions 3, Murders), Everyone is Tulip is a deeply psychological exploration of the new frontier of modern media and the discomfort of internet fame.

Originally from the drug-infested wasteland that is Arizona, Dave Baker writes and draws things. He's written everything from infomercials to feature films. He's worked for companies such as 20th Century Fox Home Video, Universal, and Disney XD. He also writes the comic books Suicide Forest, F*ck Off Squad, Teenage Switchblade, This Is Not A Girl Gang, and Professor Cuties. He's currently writing and co-drawing the comic book Action Hospital.
If the item details above aren’t accurate or complete, we want to know about it.

The Logic of Practice - by Pierre Bourdieu (Paperback)