Everything in Moderation - by Daniel Finkelstein (Hardcover) 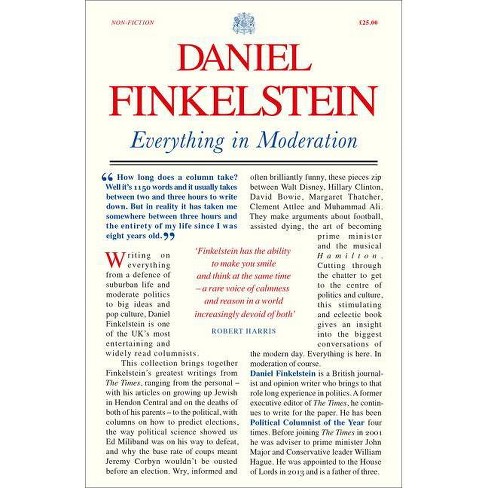 $28.99
new at target¬
0 out of 5 stars with 0 reviews
be the first!be the first! ratings
Help us improve this page

'How long does a column take? Well it's 1,150 words and it usually takes between two and three hours to write down. But in reality it has taken me somewhere between three hours and the entirety of my life since I was eight years old.'

Writing on everything from a defence of suburban life and moderate politics to big ideas and pop culture, Daniel Finkelstein is one of the UK's most entertaining and widely read columnists.

This collection brings together Finkelstein's greatest writings from The Times, ranging from the personal - with his articles on growing up Jewish in Hendon Central and on the deaths of both of his parents - to the political, with columns on how to predict elections, the way political science showed us Ed Miliband was on his way to defeat, and why the base rate of coups meant Jeremy Corbyn wouldn't be ousted before an election.

Wry, informed and often brilliantly funny, these pieces zip between Walt Disney, Hilary Clinton, David Bowie, Margaret Thatcher, Clement Attlee and Muhammed Ali. They make arguments about football, assisted dying, the art of becoming Prime Minister and the musical Hamilton. Cutting through the chatter to get to the centre of politics and culture, this varied and stimulating book gives an eclectic insight into the biggest conversations of the modern day. Everything is here. In moderation of course.