Everything That Burns - (Enchantée) by Gita Trelease 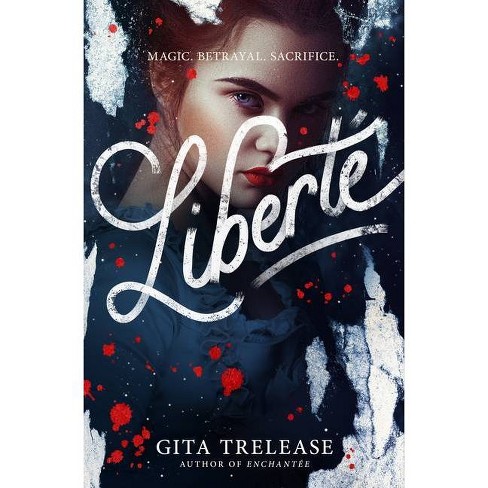 As the Revolution ignites Paris, Camille Durboness secretly uses magic to help girls living in society's margins, and when all magicians are declared traitors to France, Camille must decide who she is and what she believes.

Gita Trelease's Everything That Burns is the transporting sequel to All That Glitters, hailed by NPR as a "soaring success"!

Camille Durbonne gambled everything she had to keep herself and her sister safe. But as the people of Paris starve and mobs riot, safety may no longer be possible... ...Not when Camille lives for the rebellion. In the pamphlets she prints, she tells the stories of girls living at society's margins. But as her writings captivate the public, she begins to suspect a dark magic she can't control lies at the heart of her success. Then Louis XVI declares magic a crime and all magicians traitors to France. As bonfires incinerate enchanted books and special police prowl the city, the time for magic--and those who work it--is running out. In this new Paris where allegiances shift and violence erupts, the answers Camille seeks set her on a perilous path, one that may cost her the boy she loves--even her life. If she can discover who she truly is before vengeful forces unmask her, she may still win this deadly game of revolution.

"Enchanting, lyrical, and fierce, Everything That Burns is a captivating YA historical fantasy with thought-provoking themes. Definitely recommended for a book club read." --YA Books Central "Diverse characters, a compelling plot, romantic tension, and Camille's internal conflict with her own magic powers fuel this intriguing story that will resonate with fantasy and historical fiction fans." --School Library Journal Praise for All That Glitters (previously published as Enchantée): NPR Best Book of the Year
Book of the Month Club Pick "A soaring success. I can think of no more satisfying way to fly across the years and enjoy a gilded view of Paris as it never was but could have been, with a little magic." --NPR (A Best Book of the Year) "Romance and fantasy readers will enjoy the magic realism, ruse and tension of Camille's double identity, authentic historical references, and Camille's daring, passionate spirit. A must-have." --School Library Journal, starred review "Set against the burgeoning throes of revolution, this immersive drama makes brilliant use of its conceit, suggesting that the decadent opulence of the French nobility was maintained by a fragile illusion that depended on the abject sorrow and blood of the French people. The period detail is exquisite, with Camille's family situation and the inclusion of the problems surrounding the development of the hot-air balloon (Camille falls for an aeronaut) enabling readers to see what daily life was like for various classes of people as well as what new technologies were on the horizon. Fans of substantial historical romance as well as fantasy will be thoroughly enchanted." --The Bulletin

"An immersive, glittering debut that intriguingly blends history and fantasy. A striking examination of power, privilege, and choice in a limited world makes Trelease a new voice to watch." --Booklist

"An extended riff on Charles Perrault's version of the Cinderella tale, this is an ambitious, rich and absorbing debut, featuring intrigues, balloons, midnight games of hide-and-seek among the fountains at Versailles. A thrilling account of love, passion, and adventure." --Literary Review (UK) "A triumph that should keep young readers enthralled to the meticulously plotted end." --The Telegraph (UK) "Deliciously addictive, this book is a lit firework crackling with treacherous magic, decadent romance, and disguises that take on lives of their own." --Stephanie Garber, author of Caraval "Air balloons and intrigue, magic and mayhem, all in a sumptuous Paris on the verge of revolution--a delight from beginning to end." --Alison Goodman, author of The Dark Days Club "A heady, sparkling dream of a book: one of the best fantasies I've read in years." --Margaret Rogerson, author of An Enchantment of Ravens

Born in Sweden to Indian and Swedish parents, Gita Trelease has lived in many places, including New York, Paris, and a tiny town in central Italy. She attended Yale College and New York University, where she earned a Ph.D. in British literature. Before becoming a novelist, she taught classes on writing and fairy tales. Along with her husband and son, Gita divides her time between a village in Massachusetts and the coast of Maine. She is the author of All That Gilttters and Everything That Burns.
If the item details above aren’t accurate or complete, we want to know about it. Report incorrect product info.