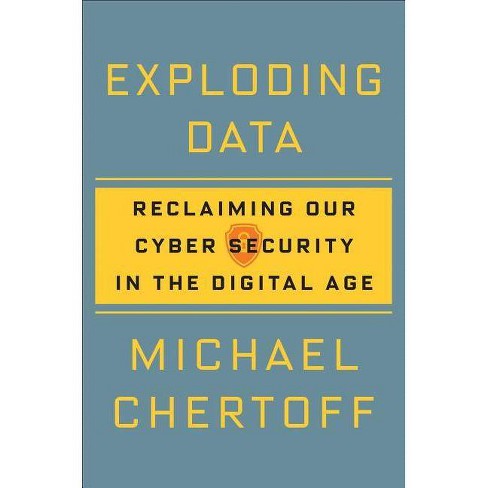 "An important and insightful critique . . . [Michael Chertoff] argues that the new legal regime should address the need for Internet service providers to be responsible for policing the security of their networks, including ensuring that extremist websites and the sites that promote 'fake news' are carefully monitored and controlled . . . An authoritative guide to understanding the legal and security challenges posed by the rapidly evolving digitally driven cyber landscape."--Washington Times

"[Chertoff] advocates, for the greater public good, a secure communications infrastructure protected by ubiquitous encryption at the device, server, and enterprise level without building in means for government monitoring. What's actually at stake isn't simply loss of privacy but individual autonomy--personal choices unfettered by manipulation and force. A tremendous resource for any reader about ever-shifting threats embedded in data collection and control."--Library Journal (starred review)

"Timely . . . Chertoff has a unique perspective on data security and its implications for citizen rights as he looks at the history of and changes in privacy laws since the founding of the U.S. . . . Chertoff states that it's time to shift our priorities from privacy to autonomy as the expansion of data the government collects should be accompanied by a tightening of rules regulating how and when data can be excavated. A serious but accessible book on an important subject that affects us all."--Booklist

"The former Secretary of Homeland Security surveys the brave new world of data collection and analysis and finds that both the legal system and international relations have yet to keep pace with technology . . . The author's experience in these areas runs deep, and he shows reasons for concern in areas many readers might not have considered . . . The world of data as illuminated here would have scared George Orwell."--Kirkus Reviews

"Few people--maybe only Michael Chertoff--could write a book like this. It combines his unique experience as Federal prosecutor, judge, assistant attorney general on 9/11 and then Secretary of Homeland Security to describe in layman's language the ubiquity of "digital exhaust" we leave for others to learn about us and lawfully or unlawfully track us. This "must read" book describes the barriers to "opting out" and the need to modernize legal authorities if we are to protect both security and privacy."--Jane Harman, CEO of the Wilson Center and former member of U.S. House of Representatives Intelligence and Homeland Security committees

"When George Orwell wrote 1984, little did he suspect that most of us would willingly carry the tools of our surveillance in our pockets. Michael Chertoff brings his unmatched legal skills and experience to propose tougher restrictions on the use, retention and dissemination of the data that is exploding around us. This important book is a vote for sanity in the midst of chaotic change."--Joseph S. Nye, Jr., author of The Future of Power

"This important book offers highly intelligent commentary, of a kind I have not read elsewhere, on the challenges posed by the technology revolution and the accompanying 'explosion' of data. Michael Chertoff's experience as a leader in national security, where we worked together, brings exceptional insight to issues we spend so much time talking about and find difficult to understand. He explains the pervasive implications for individual privacy, personal safety, national security and international relations. He highlights key issues often overlooked, notably the role of data analytics. I especially recommend the advice on how best to approach private sector encryption and the balance between privacy and security. This is a 'must read' for experts and the general public alike. We all have interests at stake. We must all learn how best to protect them."--Sir John Scarlett, Chief of the Secret Intelligence Service (MI6) 2004-2009

"In his characteristic thoughtful and balanced manner, my friend and predecessor Mike Chertoff highlights in this new book not only our eroding privacy in the era of big data, but also the risks of loss of our freedom to make personal choices that this era presents. Those in law enforcement, national security, corporate America and even the public at large should take the time to understand what Mike is saying to us."--Jeh Johnson, former Secretary of Homeland Security 2013-2017

"Exploding Data What a great title for a book in an age of surveillance, botnets, digital piracy, the internet of things and now Facebook's loss of personal data. And former Secretary of Homeland Security Mike Chertoff does not disappoint as he introduces readers to the fundamentals of personal, national and global cyber security. Beyond education, his is also a call to action--to restructure laws, policies and practices in the face of technological disruption."--General Michael V. Hayden, former Director of the National Security Agency, former Director of the Central Intelligence Agency, and author of Playing to the Edge: American Intelligence in the Age of Terror

"For citizens and policymakers who care about privacy in the cyber era, thoughtful illumination from a seasoned practitioner and wise judge."--Graham Allison, author of Destined for War: Can America and China Escape Thucydides's Trap?

"Exploding Data is a must read, cogent analysis of the impact of the data revolution on our individual safety, privacy and freedom that we are only now reckoning with in light of Cambridge Analytica and the almost daily reports of data breaches and cyber offenses. Michael Chertoff lays out a clear and thoughtful roadmap for policy makers to act with urgency to update our laws to reflect our current cyber reality."--Senator Kelly Ayotte

"Seems that daily one hears one disturbing and vexing story after another about the theft of personal data, be it highly coveted Social Security numbers, credit card information, crucial national security secrets or other vital personal data that 'someone' was meant to securitize but failed. Former Secretary of Homeland Security Michael Chertoff frames the complicated and growing problem in Exploding Data. Part digital evolution history, part relatable vignettes of cyber hacks, Chertoff probes the challenges of securing private and government data for anyone using the internet and offers policy and legislative remedies. Must read for policy wonks and internet-phobes alike."--Ellen Tauscher, former U. S. Representative and Under Secretary of State for Arms Control and International Security Affairs

"In terms of insight, intellect, and experience, Michael Chertoff is uniquely placed to undertake diagnosis and offer prescriptions for the range of contemporary dangers to our security. He addresses those threats, both man-made and natural, with a clarity of thought and conviction of purpose that provides an immense service and inspiration to all of us, far beyond the shores of his own homeland."--John Reid, former UK Home Secretary and Defense Secretary

"A valuable tool for emergency management and homeland security practitioners in all sectors and of all levels. It addresses a wider audience by challenging policymakers to continue crafting workable solutions . . . It also provides a starting point for scholarly research. But, most important, it makes you think."--Journal of Homeland Security and Emergency Management

"As memories of 9/11 fade, the nation has required a tough-minded realism against growing complacency. In Michael Chertoff, the nation had a keen thinker, a straight talker, an honest broker, and a diligent doer at the head of the Department of Homeland Security. Michael Chertoff remains driven to inform and persuade. In comprehensive fashion, this book tells America and the world what we've been doing and what we still must do to enhance our safety and security."--Frances M. Fragos Townsend, former homeland security adviser to President George W. Bush

"Michael Chertoff offers a clear-eyed assessment of the threats we face and how to confront them. Among his good ideas are the use of soft power to project and protect America's values, and improved efforts to prepare--rather than scare--an anxious public. In contrast to the toxic political environment that surrounded him, Chertoff's pragmatism and lack of partisanship are on full display, and he has written a valuable primer for his very able successor."--Representative Jane Harman (D., Calif.), chair of the Homeland Security Subcommittee on Intelligence and Terrorism Risk Assessment

"America's response to the 9/11 tragedy was the establishment of a new Department of Homeland Security created from 22 separate federal agencies. Just about every issue imaginable came to this new department, from protecting our borders and ensuring the safety of passengers in the air from terrorist attacks to maintaining defenses against natural disasters. Michael Chertoff, only the second person to serve as secretary in this office, describes with penetrating analysis the strategy that has emerged from this huge challenge, the eyes-open risk-costs analysis that has made it manageable, and the steps that have been taken to turn this gigantic effort into a well-coordinated and effective line of defense for our citizens. What a useful gift to his new successor, former Governor Janet Napolitano."--William Webster, chairman, Homeland Security Advisory Council, former FBI director, former CIA director