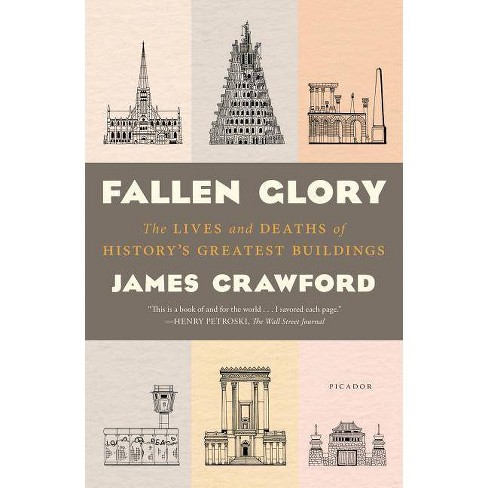 $23.49
MSRP$24.00
no reviews yet
be the first!be the first! ratings
Shipping
Free standard shipping with RedCard
Loading, please wait...
Help us improve this page

"No one can accuse Fallen Glory of lacking ambition....It's a narrative that spans seven millennia, five continents and even reaches into cyberspace. At over 600 pages with endnotes, it's a commitment. I savored each page."--Henry Petroski, The Wall Street Journal

"Crawford's astute, entertaining, and affecting gallery of ruins will appeal to readers drawn to the intersection of history and architecture."--Gilbert Taylor, Booklist

"The most interesting book I have come across this year. This is a magnificent study of buildings and other structures that have disappeared. Crawford writes beautifully and tells a fascinating tale that embraces the Library of Alexandria, the Berlin Wall and, in the virtual world, the now defunct Geocities. A lovely, wise book."--Alexander McCall Smith, New Statesman (UK)

"This well-researched and evocative work turns history into biography with the fascinating tales of the lives and deaths of [21] structures from around the world. Crawford...reveals a witty and intelligent literary voice....Later chapters on the World Trade Center's collapsed Twin Towers and the Islamic State's obliteration of the ancient city of Palmyra reveal dramatic, startling connections between past and present, creator and destroyer, politics and culture."--Publishers Weekly

"Civilisations and their buildings, writes Crawford, inevitably succumb to the 'eternal cycle of rise, decline and fall.' He conveys superbly these absorbing tales of hubris, power, violence and decay."--The Sunday Times (UK)

"Magnificent...Many of these buildings can be seen as microcosms of the decline and fall of whole civilisations."--The Daily Telegraph (five-star UK review)

"Crawford has a striking ability to summon the reality of these long-vanished places, trotting nimbly through eras of history and archaeology to trace the extent to which they protrude into fact...[he] writes exquisitely, combining economy and clarity with beautiful flights of phrase, and his scholarship is meticulous. Fallen Glory is a marvelous book. A second helping would be more than welcome."--The Literary Review (UK)

"Crawford tells the intricate biography of each of his buildings with the unspoken assumption that in some way a building (like the city in which it exists) is alive...The result is a cabinet of curiosities, a book of wonders with unexpected excursions and jubilant and haunting marginalia...Ideas spin off ideas and facts off facts like a marvelous clattering snooker-table."--The Spectator (UK)