Fields of Learning - by William a Paquette (Paperback) 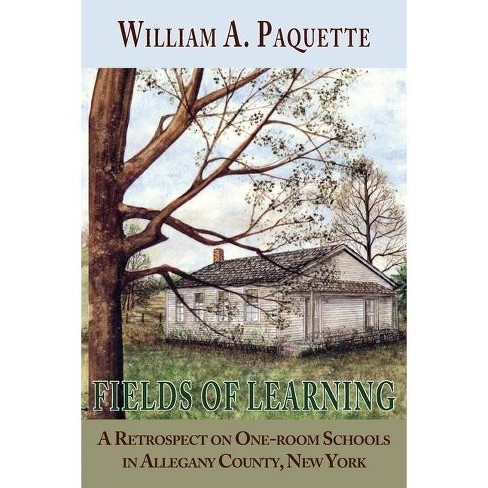 Fields of Learning thoroughly explains the rich history of one-room schoolhouses, and their metamorphosis through time. Their history has merit standing alone, but Fields of Learning also completes their history using 14 illustrations and over 180 pictures. You will be transported back in time as you learn about the early foundations of American education.

One-room schools were a product of a patriotic agricultural America, which believed that education enriched one religiously, promoted economic opportunity and social mobility while anchoring communities around the school. Rural schools promoted education to extend the virtues and democratic values of the United States to each new generation. Allegany County, New York's commitment to education began with the establishment of the first elementary school in 1802, the first private high schools in 1848, and the first university in 1836. Rural schools in Allegany County were usually built on less productive farmland and in town near the business property of the person who donated the land.

One-room schools architectural styles included: vernacular: a one-room log cabin, folk vernacular structures resembling agricultural outbuildings with a single entrance and two or three windows on each side, mass vernacular buildings, which could pass for churches or town halls, architect designed buildings with recognized architectural features and a variety of building materials, and monumental, a multi-storied structure with multiple rooms on each of two floors. One-room schools measured 28 by 40 feet with a height of 15 feet. Their length was believed based on the range of the human voice.

The year 1910 in the history of Allegany County, New York offers the most detailed understanding of the cost and value for one-room schools. Enrollments, state aid, average attendance, assessed valuation, expenditures, cost/person, and tax rates were recorded and analyzed. The early 20th Century data provides detailed information on the curricula for each grade level from grade one to grade eight. Documentation provides insight into what expectations were for both teachers and pupils as the educational experiment progressed from year to year. As the United States became less agricultural and more industrial, the demand for high school education increased. Allegany County rose to the challenge establishing seventeen high schools. New York State involvement established norms for teacher training, curricula, and educational programs, which one-room schools could no longer meet. Education in 20th Century Allegany County became one of educational consolidation with one-room schools becoming a memory and consolidated schools encompassing grades kindergarten to twelve the norm. Consolidation gradually removed schools for any grade level from the majority of Allegany County's twenty-nine townships. In 2019, there are only twelve school districts in the entire County. The closing of schools eventually led to the collapse of many County villages and hamlets illustrating how education was closely entwined with community and how one could not survive without the other.