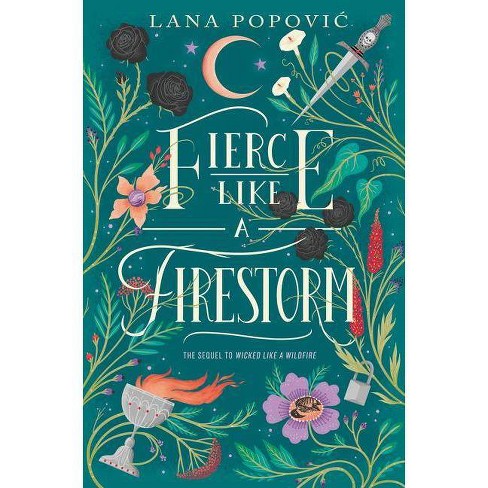 "Lush. Delicious. Bewildering. And darkly magical. Popovic has created a world that you tumble into from the very first words and wish you could stay in forever." --Evelyn Skye, author of The Crown's Game

In the bewitching conclusion to Lana Popovic's sumptuous and romantic teen fantasy duology, perfect for fans of Holly Black and Leigh Bardugo, Malina must rescue her twin sister from a magical power more dangerous than Death.

Twin sisters Iris and Malina thought they knew how to reverse the ancient curse that haunts their line, the spell that destines them to use their gleams--unique forms of beauty-manipulating magic--to entice and enchant none other than Death himself. But both sisters thought wrong.

Instead of ending the wicked bargain with the power of her infinite bloom, Iris is taken to an uncanny realm between this world and the next. Only, unlike all of Death's companions before, Iris's body goes on the one-way journey along with her soul, arriving in a kingdom never meant to sustain a living girl.

Left behind, Lina searches for a way to save Iris. But as Lina unearths the dark secrets that bind her family and Iris tries to outwit Death on his own terrain, a power resurfaces that even Mara, the original witch mother, fears.

Now both sisters must learn to fully embrace their gleams--or else they'll truly lose each other forever.

5 out of 5 stars
Would recommend
Autumn - 1 year ago, Verified purchaser
I love this series, and was looking forward to the sequel, which definitely was an amazing read! I recommend this and the first book of the series to anyone who loves magical books.
Did you find this review helpful?
Report review