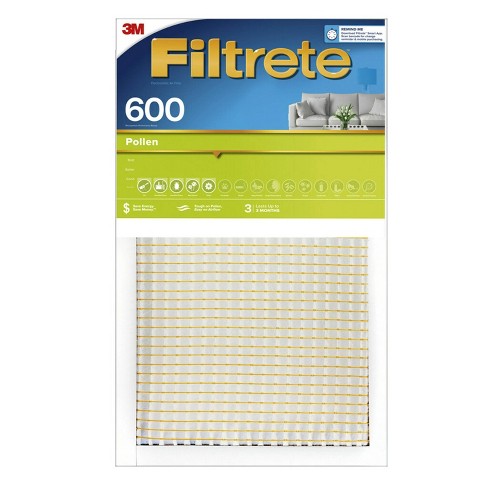 You run a tight ship at home, from floor to ceiling--and everywhere in between. Unfortunately, ordinary home non-electrostatic air filters aren’t super effective at capturing unwanted particles. GOOD NEWS : The unique design of the electrostatically charged Filtrete Pollen Air Filter attracts--and traps--more particles from your air through your heating and cooling system, making quality control a breeze. With each cycle through the filter, your indoor air becomes a little bit cleaner.
-OUTPERFORMS FIBERGLASS, WASHABLE AND NON-ELECTROSTATIC 3-month pleated 1 in. air filters for your furnace, air conditioner or HVAC system
-DESIGNED WITH EXCLUSIVE Filtrete Brand 3-in-1 technology from 3M to trap unwanted air particles while letting cleaner air flow through
-ATTRACTS AND CAPTURES large particles such as lint, household dust and dust mite debris
-MPR 600 has a rating of MERV 7
-The higher the MPR, the more microparticles - such as pollen, pet dander and smoke - your filter will capture from the air passing through it
-CHANGE FILTER AT LEAST EVERY 90 DAYS for optimal performance of your heating and cooling system or HVAC system
-A dirty filter will slow down air flow and make the system work harder to keep you warm or cool--wasting energy. Sign-up for a filter change reminder program (www.filtrete.com/ChangeReminders) that works for you!
-FOR RESIDENTIAL use only
-CREATE A CHANGE COUNTDOWN in the Filtrete Smart app. Simply use the app to scan the barcode on your filter’s packaging, then choose 30, 60 or 90 days for your replacement countdown. When the lifespan is up, you’ll get a notification to change your filter
-Manufacturer part number: 9832-4
If the item details above aren’t accurate or complete, we want to know about it.

submitted by ABC - 3 years ago

submitted by Size - 4 years ago
See all questions (2)

5 out of 5 stars
CS26 - 6 months ago
originally posted on filtrete.com

Works better than most filters! Great product ! Love it!
1 guest found this review helpful. Did you?

5 out of 5 stars
Would recommend
danp - 11 months ago, Verified purchaser
reduces dust and alergens without impeding airflow
5.0
quality
out of 5
quality: 5 out of 5
5.0
value
out of 5
value: 5 out of 5
1 guest found this review helpful. Did you?

1 out of 5 stars
Would not recommend
chyloef - 11 months ago, Verified purchaser
This is a very poor quality filter. Returned and purchased a better quality.

Thank you for leaving your review. We are sorry to hear this and are happy that you returned the product. We would not have expected the product to be as described. If there is anything else we can help with please connect with us directly at 1-800-388-3458 M-F 8am-4:30pm CT.
1.0
quality
out of 5
quality: 1 out of 5
1.0
value
out of 5
value: 1 out of 5
Did you find this review helpful?

3 out of 5 stars
Would recommend
Target Mom - 1 year ago, Verified purchaser
Beware… the arrows on these filters are misprinted. The arrow should face the wire reinforced side of the filter, pointing towards the furnace/blower motor. The softer, accordion side should face away from the furnace so it can properly filter the air coming in before it gets to the furnace. Watch YouTube if you’re confused, but please don’t trust these arrows. Otherwise, these filters work well, but should probably be replaced within 1-2 mos.
3.0
value
out of 5
value: 3 out of 5
3.0
quality
out of 5
quality: 3 out of 5
8 guests found this review helpful. Did you?

5 out of 5 stars
Would recommend
B - 1 year ago, Verified purchaser
Filter was a little pricey.
Did you find this review helpful?

1 out of 5 stars
Would not recommend
Angie - 1 year ago, Verified purchaser
This sucks. We bought this because our unit was having trouble with air flow. We thought a lower number would help. While it helped immensely with air flow, the filter was actually useless. The most is does is keep out large debris from your unit. It also get sucked inside the unit so when you go to take it out, it’s all bowed and you have have to rip it apart to get it out. We also had the worst allergies with this filter in, so dont buy it if you suffer with allergies. Cheap enough, but there’s a reason for that!!

Hello, thank you for taking the time to leave your review. We offer many different Filtrete(TM) filters and the media is woven differently and the tighter the weave the higher the percentage of particle capture. Please know we will be sure to forward your comments. If you have any additional feedback or questions, please feel free to reach out to our team at 1-800-388-3458 Mo-Fri 8am-4:30pm CT and mention file number 26428463.
1.0
quality
out of 5
quality: 1 out of 5
5.0
value
out of 5
value: 5 out of 5
Did you find this review helpful?

4 out of 5 stars
- 2 years ago, Verified purchaser
This is a nice filter. I have allergies so I wanted a good filter for our air conditioning. The only problem was that it arrived with the frame damaged in a couple of areas. Thankfully, it still popped into the return and worked. It keeps the dust at bay to help my allergies.
2 guests found this review helpful. Did you?

5 out of 5 stars
Would recommend
sothpaw - 2 years ago, Verified purchaser
Pretty standard filter. HVAC guy recommended buying the cheaper, lower MPR rated filters & changing every 30 days. Have noticed a big difference in air quality & on the pocketbook.
5.0
quality
out of 5
quality: 5 out of 5
5.0
value
out of 5
value: 5 out of 5
3 guests found this review helpful. Did you?

5 out of 5 stars
Would recommend
Temblorin - 2 years ago, Verified purchaser
Does what a filter should do. Snug fit sometimes but other times others of the same model are too loose. Shipping is horrible. Expect a huge box and bent filters
3.0
value
out of 5
value: 3 out of 5
5.0
quality
out of 5
quality: 5 out of 5
Did you find this review helpful?

1 out of 5 stars
Would not recommend
Millie - 2 years ago
Not worth it! pay the extra $$ for a different kind. It literally lasted me a week before becoming filled with dust. It says good for 3 months, so I didn't think to check a week in. I started smelling a smell close to cigarettes and it was coming from my furnace. I took it out, and it was filtier than my last filter (obviously another brand), which was on for the full 3 months.

We are sorry to hear you are having trouble. Please contact our support team so we can gather more information to better assist. Our team can be reached at 1-800-388-3458 Mo-Fri 8am-5pm CT.
Did you find this review helpful?

Flimsy and too thick

1 out of 5 stars
Patrick - 2 years ago
Returning these ASAP. They are so flimsy I couldn't put them in. Also, the cardboard is thicker than they used to be. I measured one side by side with our old ones of the same brand and size. Will check with our furnace guy on a better brand.

Hello, thank you for taking the time to leave your review. We are sorry to hear of the trouble, and we would appreciate the opportunity to discuss this with you and gather further details. Please connect with our team at 1-800-388-3458 Mo-Fri 8am-5pm CT. Thanks again, and we look forward to your call.
1.0
quality
out of 5
quality: 1 out of 5
1.0
value
out of 5
value: 1 out of 5
Did you find this review helpful?

1 out of 5 stars
Would not recommend
Bummer - 2 years ago
Flimsy. Making a whistle sound since it keeps getting sucked up into the vent a bit more than any other filter as my unit must be much stronger than this design can handle.

5 out of 5 stars
Rori - 2 years ago
originally posted on filtrete.com

Got a new air conditioner 2 years ago. Never changed the filter. My son got me this filter cause I kept forgetting to get one, The next day after putting it in noticed that I was coughing as much anymore. Thank you.
3 guests found this review helpful. Did you?

did not fit and one had barely any filter

1 out of 5 stars
unimpressed - 2 years ago
originally posted on filtrete.com

I bought this pack because they di dnot have the red type in stock and I needed some quickly. One had very thin fabric atspopts; you coul;d see my finger through the thin material. I tried to fit the other one in but the cardboard was too big. It jammed trying to slide it in. Only got one inch inside the furnace frame. Gave up and bought red filters. 3M did not try to help when I sent a message.

Hello, thank you for taking the time to leave your review. Your experience is not what we would expect, and we would appreciate the opportunity to discuss this with you and gather further details. Please connect with our team at 1-800-388-3458 Mo-Fri 8am-5pm CT. Thanks again, and we look forward to your call.
1 guest found this review helpful. Did you?

5 out of 5 stars
Spankey80 - 3 years ago
Reply to the review written by "Bartstar." Just for future reference, the smaller the micron rating, the BETTER the filter will be at collecting the smaller particles! Your statement said the 600 wont pick up half of the stuff a 1000 or a 1500 would, but you have that completely backwards! 600, 1000, 1500 must be the particular filter type number because if I remember correctly, the higher the MERV rating, the higher the model number. So that means that number is NOT the micron collection rating. Basically, smaller and/or "finer" particles in the air are measured in size by microns. The smaller the micron, the smaller the particle, and if a filter will catch a smaller particle then it's a "better" filter. I put better in quotes because it all depends on how you look at it. Filters that catch smaller particles also restrict more airflow and can put a strain on your AC unit if the airflow is reduced too much. Just thought I would help you to pick filters better in the future!
3 guests found this review helpful. Did you?

5 out of 5 stars
Would recommend
Ravintsara - 3 years ago, Verified purchaser
Our old system has to use a simple like this one. Keeps the dust down.
2 guests found this review helpful. Did you?