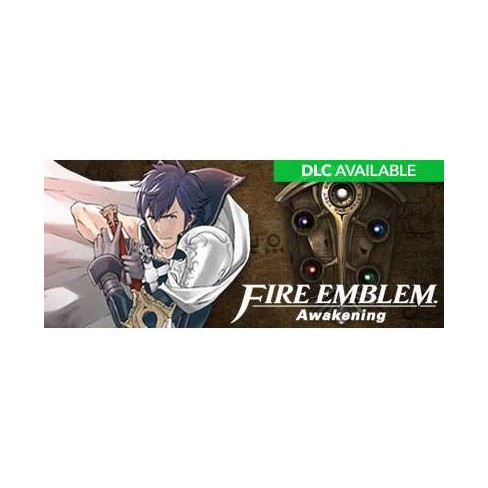 Fire Emblem: Awakening offers a unique blend of in-battle strategy, vast character customization, and 3-D cinematic graphics that appeal to a wide range of gamers. In this fantasy adventure for the Nintendo 3DS, you have the power to turn the tides of battle in an epic war against a dark dragon. Your fire-breathing foe threatens to destroy the entire empire with help from his armies of the undead. But, with your loyal crew of fighters, you could be the one to stop him for good.

In this game, you’ll join Chrom, brother to Ylisse’s empress and commander of its forces, in a fantasy world teetering on the brink of war. It’s your duty to guide a team of Ylisse’s finest soldiers - knights, mages, archers, and more - against the marauding Plegian bandits. To succeed, you will need to carefully choose the units you take into battle. As you lead your team through battles across maps that span entire kingdoms, your army will grow. Some characters are willing to join you quickly, while others may need more persuasion. Each character earns experience in battle, leveling up and gaining strength and abilities as they do so. It’s up to you to guide their moves, choose their weapons, and direct their attacks.

Create your own customized soldier and join a massive cast of interesting characters who all have their own stories to tell. Heighten your power on the battlefield by strengthening the bonds between your troops and even enlisting a friend of your own. Plus, with StreetPass and SpotPass options, you can access new items, characters, and maps.

Key Features
Immersive Story and Visuals: The fantasy storyline is told through 3D visuals and movies.

Deep Cast of Characters: A large selection of characters is at your command, each with unique personalities and background stories, and different class types and skill sets.

Customization: Create your own personalized character and fight alongside heroic characters on the battlefield.

Strengthen Bonds in Battle: Team up characters to strengthen their friendships on the battlefield. The closer they grow, the better these friends and allies will fight together.

Local Multiplayer Mode: Team up with your friend and fight against a group of enemies in the local multiplayer mode.

StreetPass Feature: Exchange your team data and recruit or battle against other players' teams or purchase rare items they might carry.

​In the visually stunning world of the Fire Emblem Awakening game, you command and fight alongside an army of spirited heroes standing against an enemy with the power to destroy empires; a dark dragon whose agents include armies of the undead. Plan your attack, customize your forces, and guide your heroes as you forge alliances that strengthen your resolve in battle and shape the course of history. Lead a team of distinct characters with unique abilities, rich backstories, and evolving relationships that guide the path of your quest. Plan your attack carefully – the lives of your soldiers and the future of the world depends on it.

System Requirements: Supported Platforms: Nintendo - 3DS
If the item details above aren’t accurate or complete, we want to know about it. Report incorrect product info.