Fish Out of Water - by Eric Metaxas 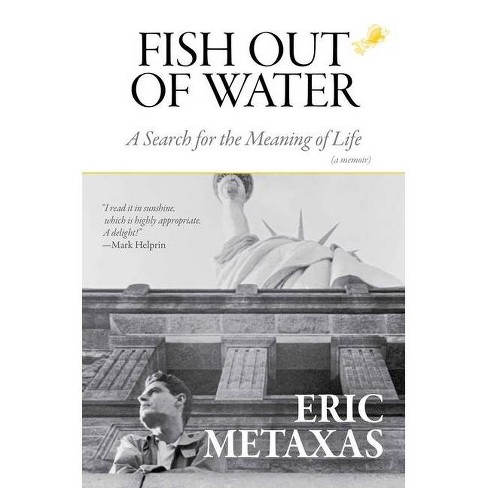 What Happens When One of America's Most Admired Biographers Writes His Own Biography? For Eric Metaxas, the answer is Fish Out of Water: A Search for the Meaning of Life--a poetic and sometimes hilarious memoir of his early years, in which the Queens-born son of Greek and German immigrants struggles to make sense of a world in which he never quite seems to fit. Renowned for his biographies of William Wilberforce, Dietrich Bonhoeffer, and Martin Luther, Metaxas is the author of five New York Times bestsellers, the witty host of the acclaimed Socrates in the City conversation series, and a nationally syndicated radio personality. But here he reveals a personal story few have heard, taking us from his mostly happy childhood--and riotous triumphs at Yale--to the nightmare of drifting toward a dark abyss of meaninglessness from which he barely escapes. Along the way he introduces us to an unforgettable troupe of picaresque characters who join this quintessentially first-generation American boy in what is both bildungsroman and odyssey--and which underscores just how funny, serious, happy, sad, and ultimately meaningful life can be.

"A delight! Eric Metaxas has crafted for each discerning reader a personal gift: A richly detailed, lovingly remembered American story that faces squarely serious issues to which every one of us should attend. From the struggles of immigrant families to bullying in school, from the trauma that victims of war and totalitarianism carry to the hunger for meaning that postmodern students face in college, Eric uses his own experience to illumine enduring, important questions. He does so with humor [and] moral insight..." -John Zmirak, editor at The Stream.org

"Eric Metaxas [is] one of our nation's most brilliant and morally serious public intellectuals." -Robert P. George, Princeton University

"In this portrait of the Metaxas as a young man, deeply serious matters exist most comfortably with great wit and maximum humor. As enjoyable as it is to follow him from birth through the fog of his twenties and into the sunlight at their end, you will see that you have also painlessly embraced a wonderful complexity. Even the title represents multiple meanings woven throughout the book and, as in the solution to a mystery, unified and made clear at its end. A delight. I read it in the sunshine, which was entirely appropriate." -Mark Helprin, NY Times bestselling author of many books, including A Winter's Tale and A Soldier of the Great War

"Metaxas is a major writer. Not to be missed." -Dick Cavett

"Truth really is stranger than fiction--stranger, less predictable, often (though not always) funnier, and weirder. Reality is not fastidious, doesn't pay any attention to opinion polls. Hence the appeal of this memoir by Eric Metaxas, an account of his formative years, in which John Hersey ("Mr. Hersey"), Larry David, and other unexpected figures appear: a zany tale of literary aspirations..." -John Wilson, Books & Culture editor (1995 to 2016); contributing editor for the Englewood Review of Books; senior editor at the Marginalia Review of Books

"What do Robert Plant, ice fishing, Yale, the 1953 earthquake in Greece, John Cheever, Valium substitutes, house painters, and Bradlee's Department Store have to do with Eric Metaxas's search for the meaning of life? In a word: Everything. This memoir of one of our best writer's coming of age is a beautiful thing: deeply intelligent, spiritually acute, and laugh-out-loud funny." -Bret Lott, bestselling author of fourteen books including Jewel, an Oprah Book Club selection

"With his inimitable intelligence and wit, Eric Metaxas recounts his formative years as a first-generation immigrant, the crucial development of his ability to think for himself rather than following the herd, and the process of learning to follow his heart and mind wherever the truth leads..." -Jill Lamar, former editor-in-chief of Henry Holt and curator of new titles for Barnes & Noble

ERIC METAXAS is an author whose books have been translated into twenty-five languages. The host of a nationally syndicated radio show and the acclaimed conversation series Socrates in the City, he is a prominent cultural commentator whose work has appeared in the New York Times, the New Yorker, The Atlantic, and the Wall Street Journal. He lives with his family in New York City.
If the item details above aren’t accurate or complete, we want to know about it.

Against the Great Reset - by Michael Walsh (Hardcover)

100 Bible Verses That Made America - by Robert J Morgan

Letter to the American Church - by Eric Metaxas (Hardcover)

Battle for the American Mind - by Pete Hegseth & David Goodwin

Fish Out of Water - by Eric Metaxas (Paperback)

Letter to the American Church - by Eric Metaxas (Hardcover)

5 out of 5 stars
Would recommend
DJ - 2 years ago, Verified purchaser
I loved this book! I was totally captivated and thoroughly enjoyed his keen sense of humor! I am so looking forward to his next book that will start where this one left off. I feel I’ve been privileged to get to know the author through his honesty and vulnerability and want to hear more about his life and subsequent adventures with God.
5 guests found this review helpful. Did you?