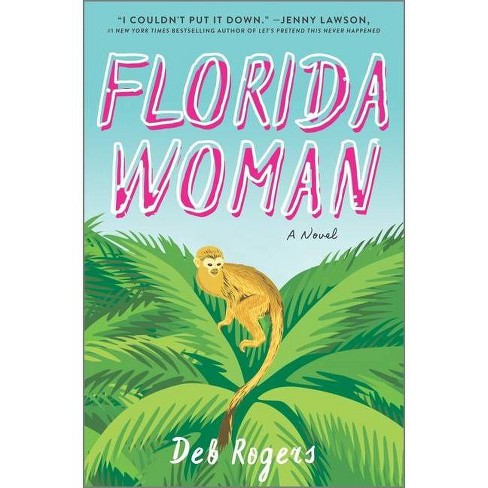 A gleefully dark and entertaining debut for fans of Kevin Wilson and Karen Russell, about one young woman's sensational summer at a Floridian wildlife center for exotic monkeys

Jamie is a Florida Woman. She grew up on the beach, thrives in humidity, has weathered more hurricanes than she can count, and now, after going viral for an outrageous crime she never meant to commit in the first place, she has the requisite headline to her name. But when the chance comes for her to escape viral infamy and imminent jail time by taking a community service placement at Atlas, a shelter for rescued monkeys, it seems like just the fresh start Jamie needs to finally get her life back on track -- until it's not.

Something sinister stirs in the palmetto woods surrounding her cabin, and secrets lurk among the three beguiling women who run the shelter and affectionately take Jamie under their wing for the summer. She hears the distant screams of monkeys each night; the staff perform cryptic, lakeside sacrifices to honor Atlas; and the land, which has long been abandoned by citrus farmers and theme park developers alike, now proves to be dangerously, relentlessly untamed.

As Jamie ventures deeper into the offbeat world and rituals of Atlas, her summer is soon set to inspire an even stranger Florida headline than she ever could've imagined.

"My kind of book. I loved it." --Joe Exotic, media personality and star of Netflix series Tiger King

"Florida Woman is a razor-sharp portrait of a woman who believes she might be an agent of chaos, who cannot avoid disaster, and the steps she takes, in the strangest of settings, to find a way not only to survive the disaster, but to be transformed by it. Deb Rogers writes with such verve and honesty about all the ways we stumble through life, and, like all great storytellers, gives us something wondrous when we reach the end of the journey." --Kevin Wilson, bestselling author of Nothing to See Here

"Such a page-turner. I couldn't put it down." --Jenny Lawson, #1 New York Times bestselling author of Let's Pretend This Never Happened

"Florida Woman is a truly wild ride -- a book that keeps you guessing with its crazy-compelling story. Vivid details, sly humor, mysterious cultish behavior, and, most importantly, lots of monkeys. It totally sucked me in and surprised me until the very last page." --Annie Hartnett, award-winning author of Rabbit Cake

"Welcome to the weird world of Atlas, an animal refuge that also happens to be home to some deeply strange human behavior. Droll, refreshing, and full of magnificent monkeys, Florida Woman is a wild and wildly propulsive novel about public mistakes, dangerous charisma, and the dark side of sanctuary. Rogers writes with verve, charm, and disarming honesty--this debut is as witty as it is heartfelt." --Kimberly King Parsons, author of the National Book Award-nominated Black Light

"Rogers smashes utopianism and utter monkey business together in this wild tale of do-gooders doing bad in Florida. You'll go bananas for it!" --Courtney Maum, author of Touch and I Am Having So Much Fun Here Without You

"My favorite type of read: lushly detailed, eerie, and a whole lot of fun. I gasped, I laughed, I gasped again. You may think you know what's about to happen, but trust me, you don't. Deb Rogers has given us a thriller for the ages." --Lindsay Hunter, author of Eat Only When You're Hungry