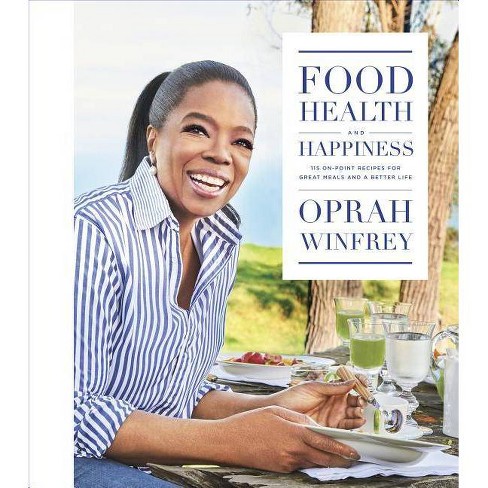 Oprah Winfrey will be the first to tell you, she has had a complicated relationship with food. It's been both a source of delight and comfort for her, but also the cause of an ongoing struggle with her weight. In Food, Health, and Happiness, Oprah shares the recipes that have allowed eating to finally be joyful for her. With dishes created and prepared alongside her favorite chefs, paired with personal essays and memories from Oprah herself, this cookbook offers a candid, behind-the-scenes look into the life (and kitchen!) of one of the most influential and respected celebrities in the world. Delicious, healthy, and easy to prepare, these are the recipes Oprah most loves to make at home and share with friends and family. From simple pleasures like Unfried Chicken and Turkey Chili, to such celebrations of freshness as Tuscan Kale and Apple Salad and Pasta Primavera, this is food as it should be: a taste of happiness, a ritual to be shared, a toast to life.

If you are a fan of entertainment mogul Winfrey, you'll love this book...Winfrey's long struggle with weight is well-known. And no matter what you think of her ties with Weight Watchers, you have to concede she knows of what she speaks. Winfrey has been there. And she tells the story with commendable candor. --Chicago Tribune

Over the course of her esteemed career, OPRAH WINFREY has created an unparalleled connection with people around the world. As host and supervising producer of the top-rated, award-winning The Oprah Winfrey Show, she entertained, enlightened, and uplifted millions of viewers for twenty-five years. Her accomplishments as a global media leader and philanthropist have established her as one of the most influential and admired public figures in the world today
If the item details above aren’t accurate or complete, we want to know about it. Report incorrect product info.