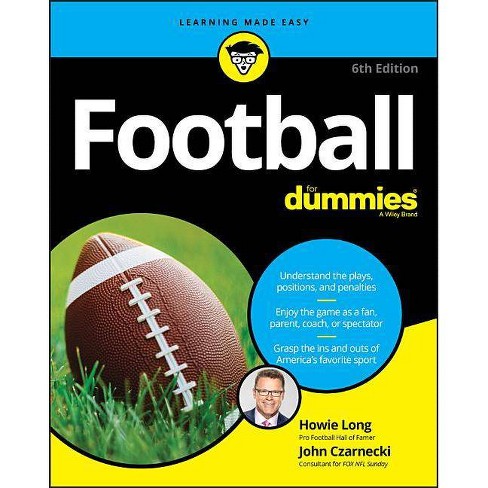 Are you ready for some football?

New stadiums have been built, new stars have been born, and records have been broken since the last edition of Football For Dummies. This new edition is the fan's ultimate, up-to-date guide to all things pigskin. Perfect for new and veteran fans of the sport alike, it covers everything you need to be the most knowledgeable spectator in the stadium.

With deep explanations of every position, analysis of offense and defense, and detailed strategies for play, football legend Howie Long and established analyst John Czarnecki present the nuts and bolts of football for fans of all ages and experiences.

Football For Dummies has something to offer fans of all ages, from peewees to the pros and everything between.

All about the pigskin, from peewee to pro!

Whether you're a diehard fan always eager to learn more or someone who just wants to understand what all the excitement's about, Football For Dummies is for you. Football legend Howie Long and established analyst John Czarnecki explain every position; the intricacies of situational play-calling; how a secondary works; offensive and defensive line formations; running and passing plays; and all the rules and regulations. The more you understand, the more fun you'll have watching or playing America's favorite game!

Howie Long is a former Oakland/Los Angeles Raiders defensive end with eight Pro Bowl appearances, a Super Bowl victory, and a spot in the Pro Football Hall of Fame. He is a commentator on FOX NFL Sunday. John Czarnecki has reported on the NFL since 1979 and consulted for FOX NFL Sunday since it began in 1994. He has received four Sports Emmys.