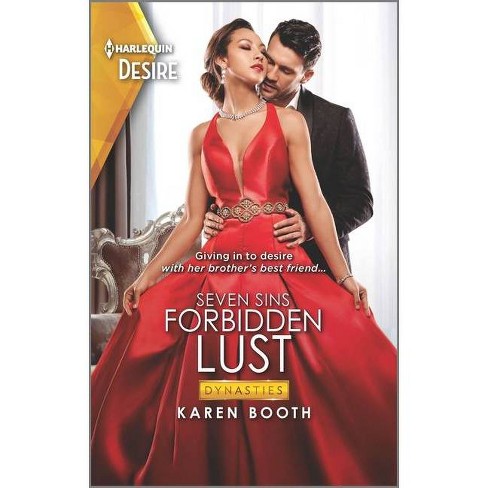 $5.29
0 out of 5 stars with 0 reviews
be the first!be the first! ratings
Help us improve this page

Feel the drama and passion in the Dynasties: Seven Sins series! Next stop, paradise--With the man of her forbidden fantasies?
Giving in to desire with her brother's best friend... A secluded island resort is the perfect romantic setting for the night of passionate abandon Allison Randall plans to share with Zane Patterson. Her elder brother's best friend has always been off-limits...and Zane is determined to keep it that way. But when a storm strands them together, neither can hold back. Everything Allison dreamed of is finally in reach...until unwelcome revelations threaten a rude awakening! Harlequin Desire: Luxury, scandal, desire--welcome to the lives of the American elite. One man's betrayal can destroy generations. Fifteen years ago, a hedge-fund hotshot vanished with billions, leaving the high-powered families of Falling Brook changed forever. Now seven heirs, shaped by his betrayal, must reckon with the sins of the past. Passion may be their only path to redemption. Experience all Seven Sins! DYNASTIES: SEVEN SINS Book 1: Ruthless Pride by Naima Simone
This CEO's pride led him to give up his dreams for his family. Now he's drawn to the woman who threatens everything... Book 2: Forbidden Lust by Karen Booth
He's always resisted his lust for his best friend's sister--until they're stranded together in paradise... Book 3: Insatiable Hunger by Yahrah St. John
His unbridled appetite for his closest friend is unleashed when he believes she's fallen for the wrong man... Book 4: Hidden Ambition by Jules Bennett
Ambition has taken him far, but revenge could cost him his one chance at love... Book 5: Reckless Envy by Joss Wood
When this shark in the boardroom meets the one woman he can't have, envy takes over... Book 6: Untamed Passion by Cat Schield
Will this black sheep's self-destructive wrath flame out when he's expecting an heir of his own? Book 7: Slow Burn by Janice Maynard
If he's really the idle playboy his family claims, will his inaction threaten a reunion with the woman who got away?
If the item details above aren’t accurate or complete, we want to know about it. Report incorrect product info.