Forest of a Thousand Daemons - by D O Fagunwa (Paperback) 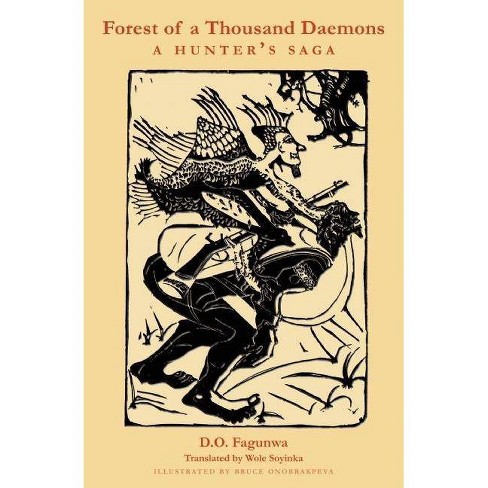 The first novel written in the Yoruba language and one of the first to be written in any African language.

His total conviction in multiple existences within our physical world is as much an inspiration to some of the most brilliant fiction in Yoruba writing as it is a deeply felt urge to 'justify the ways of God to man.'--Wole Soyinka, translator and Nobel Laureate

A classic work of African literature, Forest of a Thousand Daemons is the first novel to be written in the Yoruba language. First published in Nigeria in 1939, it is one of that country's most revered and widely read works, and its influence on Nigerian literature is profound, most notably in the works of Amos Tutuola.

A triumph of the mythic imagination, the narrative unfolds in a landscape where, true to Yoruba cosmology, human, natural and supernatural beings are compellingly and wonderfully alive at once: a world of warriors, sages and kings; magical trees and snake people; spirits, Ghommids and bog-trolls. Here are the adventures of Akara-ogun--son of a brave warrior and wicked witch--as he journeys into the forest, encountering and dealing with all-too-real unforeseen forces, engaging in dynamic spiritual and moral relationships with personifications of his fate, projections of the terrors that haunt man.

Distinguished Nobel Prize-winning author Wole Soyinka offers a supple and elegant translation and provides an essay on the special challenges of translating Fagunwa from the Yoruba into English, along with a glossary of Yoruba and unfamiliar words.

Daniel Orowole Fagunwa was born in western Nigeria in 1903. He died in a motorcycle accident in 1963.

Praise for Forest of a Thousand Daemons:

"A deep tale of the spirit; a classic of the African imagination."--Ben Okri

Fagunwa is as important to the Nigerian imagination as Grimm's tales to the Western imagination. Except that Fagunwa's book is not a collection of oral tales, but an original modern novel, one that sets out to test the limits of the form of the novel, the range of myth and its overlap into daily life. Soyinka offers us not a simple translation but a complex and truly respectful re-rendering. With this tender touch by Soyinka, Fagunwa's book comes alive--reanimated in this new language. Beautiful, important and endlessly fascinating. A must read.--Chris Abani, author of The Virgin of Flames and The Secret History of Las Vegas

Praise for the contributors:

The work of Fagunwa stands at the head of creative writing in the Yorùbá language and exerts the most pervasive influence on every category of Yorùbá literary expression . . . He responded early to the need for a literature in the vernacular, at a moment when a new cultural consciousness began to emerge out of changing social conditions."--Abiola Irele, scholar of African literature

"Among the Africans who deserve some kind of secular sainthood is Wole Soyinka."--The New York Times

"Mr. Onobrakpeya . . . is one of the best known and most prolific African printmakers."--The New York Times

Readers can only be grateful that Soyinka used his prison time to bring this important Yoruba novel into English.--Geoff Wisner, The Quarterly Conversation

In 1938, entering a literary contest of the Nigerian education ministry, Daniel O. Fagunwa wrote Forest of a Thousand Daemons, one of the first novels to be written in any African language. Fagunwa was the first Nigerian writer to employ folk philosophy in telling his stories and his influence on Nigerian literature is profound, most notable in the works of Amos Tutuola.

Fagunwa studied at St. Luke's School and St. Andrew's College in Nigeria, before becoming a teacher himself. In 1959, he was made a Member of the Order of the British Empire.

He died in 1963 and remains the most widely-read Yorùbá-language author.

Akinwande Oluwole Wole Soyinka is a Nigerian writer, notable especially as a playwright and poet; he was awarded the 1986 Nobel Prize in Literature, the first person in Africa and the diaspora to be so honored.

Soyinka has remained active in Nigeria's political history and its struggle for independence from Great Britain. In 1967 during the Nigerian Civil War, he was arrested by the federal government of General Yakubu Gowon and put in solitary confinement for two years. It is there that he translated Forest of a Thousand Daemons.

Soyinka has taught at Cornell, Oxford, Harvard, Yale, and Emory University, where in 1996 he was appointed Robert W. Woodruff Professor of the Arts. With civilian rule restored to Nigeria in 1999, Soyinka returned to his nation.

A world-renowned artist, Bruce Onobrakpeya is best known for his printmaking, painting and sculptures. He has exhibited at the Tate Modern in London, the National Museum of African Art of the Smithsonian Institution in Washington, D.C. and the Malmö Konsthall in Malmö, Sweden. In 1990 he participated in the 44th Venice Biennale where he received an honorable mention. He has received awards from the University of Ibadan, the Solidra Circle award, the Living Human Treasure Award given by UNESCO, and is the second winner of the prestigious Nigerian Creativity Award by the Federal Government of Nigeria. Its first winner was Chinua Achebe. Onobrakpeya is a founding member of the Society of Nigerian Artists.