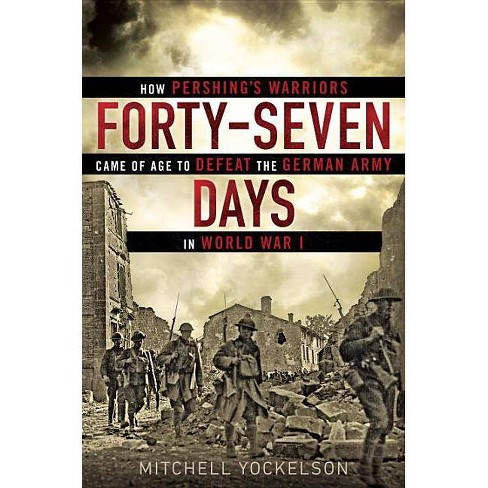 $28.00
no reviews yet
be the first!be the first! ratings
Shipping
Free standard shipping with RedCard
Help us improve this page

Praise for Forty-Seven Days "Get ready to dig into one of the wildest and deadliest battles in history. The beautifully researched Forty-Seven Days takes you right there and shows you all the minute details, from the pings of a bullet to Pershing's confidence and fears."--Brad Meltzer, New York Times Bestselling Author of The President's Shadow "On September 26, 1918, the American Expeditionary Forces began the Battle of the Argonne Forest lacking a strategy, experience, or an understanding of what lay ahead. Forty-seven days later, at battle's end, the back of the German army had been broken and General John J. Pershing had secured his place as one of the great generals in American history. The story of this pivotal battle has never been better told than it is here. Mitchell Yockelson expands our understanding not only of how World War I ended, but also of how militaries can change and adapt under conditions of great adversity."--Max Boot, New York Times Bestselling Author of The Savage Wars of Peace: Small Wars and the Rise of American Power and Invisible Armies: An Epic History of Guerrilla Warfare from Ancient Times to the Present Day

"The Meuse-Argonne campaign in 1918 was the most significant battle fought by American Doughboys in World War I. In Forty-Seven Days, Mitchell Yockelson has written a superbly researched account of their coming of age under the leadership of Gen. John J. 'Black Jack' Pershing. This book will take its place as one of the best books written about the largest and one of the deadliest campaigns in American military history."--Carlo D'Este, Author of Patton: A Genius For War "Mitchell Yockelson has become a preeminent World War I historian. With an absorbing narrative, fast pacing, and gritty detail, his Forty-Seven Days brings to life that war's final and bloody Meuse-Argonne offensive, when General John 'Black Jack' Pershing and more than one million American and French soldiers broke the back of the mighty German army."--Douglas Waller, New York Times Bestselling Author of Disciples and Wild Bill Donovan "Yockelson moves by increments through the intricate phases of Pershing's ultimate victory, which he achieved despite the greenness of his doughboys. [Yockelson] does a sharp job filling in the military details and fleshing out the biographies of the legendary figures who would feature prominently in the next great conflagration: Patton, Marshall, MacArthur, Donovan, etc....An accessible, elucidating study by a knowledgeable expert."--Kirkus Reviews

"For students of history and followers of the United States' military, [Forty-Seven Days] -- which also includes informative maps and follow-up accounts of notable participants' lives in the war's aftermath--is a must-read. In fact, it is for everyone, since most Americans know very little about our country's actions in World War I. This volume is an easy way to get caught up."--The Washington Independent Review of Books "Well written with a pulsating and dramatic narrative verve, Forty-Seven Days takes readers into the trenches with raw and untested American troops during the Meuse-Agonne campaign... Yockelson does an exceptional job of paralleling the experiences of American forces within the context of [General John J.] Pershing's life."--On Point: The Journal of Army History

"This work provides the reader a very thorough and entertaining account of the U.S. Army's first true foray onto the world stage."--Military Heritage
If the item details above aren’t accurate or complete, we want to know about it. Report incorrect product info.