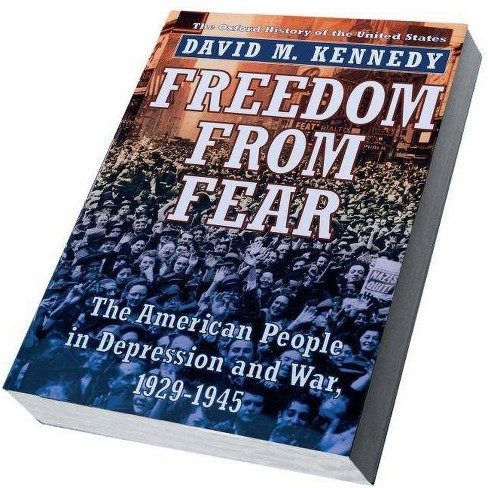 "A grand historical synthesis...[T]his is the kind of book prizes are made for."--Chicago Tribune
"This is modern America's story--modern America's most thrilling, most irresistible, and most significant story--and in this massive volume, David M. Kennedy makes it his story in a way that no one has before. Freedom From Fear, the fourth installment of the new Oxford History of the United States to appear, is as much a triumph as its predecessors, providing every indication that the series, once completed, will stand as the most comprehensive and most compelling narrative history of the nation."--Boston Globe
"Rarely does a work of historical synthesis combine such trenchant analysis and elegant writing as does Kennedy's spectacular contribution to the Oxford History of the United States. Kennedy uses a wide canvas to depict all aspects of the American political, social and economic experience from 1929 to 1945. He also provides a stunningly original reinterpretation of the competing forces and interests that combined to shape the New Deal under FDR's direction. The book's final 400 pages admirably demonstrate exactly how the U.S. emerged victorious in WWII....Because of its scope, its insight and its purring narrative engine, Kennedy's book will stand for years to come as the definitive history of the most important decades of the American Century."--Publishers Weekly
"An engrossing narrative of a momentous time. The best one-volume account of the Roosevelt era currently available....Good old-fashioned history."--The New York Times Book Review
"An indispensable account of the two great formative events of 20th century American history--the Great Depression and the second World War."--The Economist
"The book...has my strong approval. As it will have, I cannot doubt, that of the many readers it deserves."--John C. Gilbraith, The Washington Monthly
"An invaluable compendium of the hyperactive period that contains the Great depression and the Second World War."--The Washington Times
"Kennedy's book is the most illuminating, riveting, comprehensive, and graceful one-volume history of this nation's experiences during the Great Depression, New Deal, and WWII published to date....This is social, political, dipolmatic, and military history written magisterially with broad but nuanced strokes across a 16-year span that utterly transformed the lives of Americans and the world....Librarians should order this book for their libraries, faculty members should assign it, and everyone should read it."--CHOICE
"Kennedy's grasp of deep-rooted social problems and his enlightening, analytical style are very much in evidence....[He] brilliantly explores the conflicting nuances of [Roosevelt's] character and program....Kennedy has achieved a judicious balance in his treatment of the Depression and the military operations and diplomatic maneuvers of World War II. His narrative style is in the grand tradition of American historical writing, an unfaltering display of clarity and detail."--Philadephia Inquirer
"No other book so vividly captures the spirit of those 17 years that forever changed America."--Christian Science Monitor
"One of our most broad-gauged American historians brings us that increasing rarity: a big book about a big subject....The Stanford scholar takes on the job of tracing the American people through three of the most important and important and widely written about epochs in the century...and provides us with consistently original and sometimes startling conclusions."--The Washington Post
"A major achievement in objective historical writing that should be a legacy to generations of students seeking authoritative reference material on the period."--Kirkus Reviews
"David Kennedy...is absolutely masterful in this literate and lively history of the American people in the Depression and World War II."--The Waterbury Republican-American
"From its dramatic prelude depicting Franklin Roosevelt, Winston Churchill, Adolf Hitler, and Joseph Stalin hearing the news of the end of World War I on November 11, 1918, to its moving climax on board the USS Missouri in Tokyo Bay on September 2, 1945, this panoramic narrative pulses with life, color, incident, and action. We know how it all comes out, yet the fate of the nation seems to hang in the balance as Kennedy captures history's throat-catching contingency."--Jack Beatty, author of The Rascal King: The Life and Times of James Michael Curley and The World According to Peter Drucker
"We expect the best from David Kennedy and he will not disappoint anybody with this competent, complete and literate volume. Covering a time of large and intense change, it is all here. A major and thoroughly fine piece of work."--John Kenneth Galbraith
Freedom from Fear brings together in one place the epic story of how America faced the greatest challenges in its history. At a time when we tend to bemoan our selfish preoccupations, it is bracing to read David Kennedy's moving account of our better selves. This is history the way it ought to be."-- Alan Wolfe, Boston University, author of One Nation After All
"Displaying a literary craft uncommon in survey works, he has woven together narrative, sketches of character, and critical judgment to record and analyze the economic, political, social, and military events of these epic years....This account of the crucial struggles and events of the Depression and war years will lend perspective like few others."--Library Journal
"David Kennedy is one of America's most distinguished historians, and Freedom from Fear is a remarkable achievement: deeply researched, insightful, and beautifully written. Fast-paced, it presents vivid portraits of major actors such as Roosevelt, Churchill, and Hitler, as well as of the hopes and fears of millions of lesser-known people caught up in the tumultuous years of the Great Depression and of World War II."--James T. Patterson, Bancroft Prize-winning author of Grand Expectations
"Excellent text, well-written, focused."--David Lindquist, Indiana University
If the item details above aren’t accurate or complete, we want to know about it. Report incorrect product info.