From Mecca to Christ - by Ahmed Joktan (Paperback) 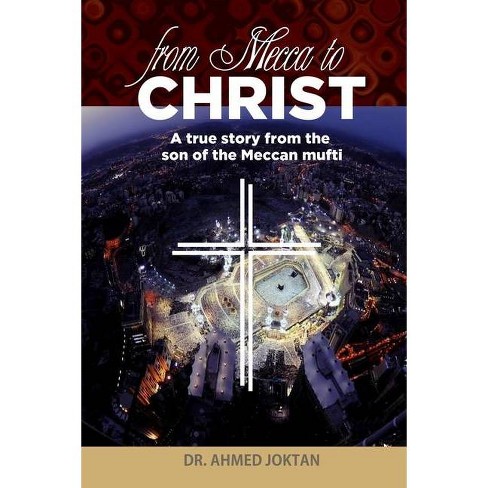 Dr. Ahmed Joktan has told a story of God's grace in action. He gives insight into present-day beliefs that will give understanding to the non-Islamic reader. More than this, his book is a rehearsal of the kindness of God extended to everyone. I hope his journey toward God's love will be your story, too.

Abandoned in the hot Saudi desert for hours at the age of four by a father who wanted to make a man out of him, flogged before reaching puberty for making the smallest error in reciting the Quran, trained to hate and terrorize the infidels in his early teen years, being visited by Jesus in a dream, receiving Christ and committing his life to his Savior, facing horrendous persecution, Dr. Ahmed is now dedicating his life to sharing the gospel with his people and drawing them to a saving knowledge of Christ. These are but glimpses of Dr. Ahmed's life. But the book is more than a testimony. It is also an introductory course on Muhammad and Islam. The author, in graphic images, exposes the hardship of growing up in Saudi Arabia and the harsh persecution after his conversion. Dr. Joktan is now a joyful, hopeful and passionate follower of Jesus with a vision for his people. Do not just read this book, take action to encourage this dear brother who has a God-given vision that we do well to support.

The book From Mecca to Christ by Dr. Ahmed Joktan, born and raised in Saudi Arabia, is a compelling testimony of his conversion abroad and his harrowing experiences of persecution upon his return as he courageously shared the gospel with fellow Saudis and other Arabs in the Gulf area. It is also a shining example of the triumph of love in his heart for his lost compatriots, in spite of their cruel treatment of him. His founding of Mecca to Christ International is a tribute to his undying love for his own people. His book closes with a passionate invitation to join him in his ministries.

I followed Dr. Joktan through his rocky progression through medical school and how his father and family rejected him because of his newfound faith in Christ. I followed him through a number of assassination attempts, instigated by his family and government - the price of daring to leave Islam. He was imprisoned, beaten, tortured, and shot with bullets. When I first met him a little more than a year ago, his face still bore the scars of previous persecution. His face likely always will. Through it all, his faith in Christ remained unshaken. His desire to share the hope of Christ with others continues. He invites any reader to join him in this holy task. Few Christians have resisted to the point of shedding their own blood in the defense of the Gospel. Dr. Joktan is an exception. From start to finish his story is permeated with grace, love, joy, and the presence of God. The book is well-written, and easy to read. Every incident contained is well-authenticated. They really happened! As a result, I take great pleasure in highly recommending Dr. Joktan's book, From Mecca to Christ, to any reader who wants to know more about how Christ is dealing today in the Muslim world. At times his story made me want to cry. Mostly it caused me to rejoice. May you experience the same.

Dr. Ed Hoskins, retired physician Author of A Muslim's Heart: what every Christian needs to know to share Christ with Muslims (Navpress 2003)