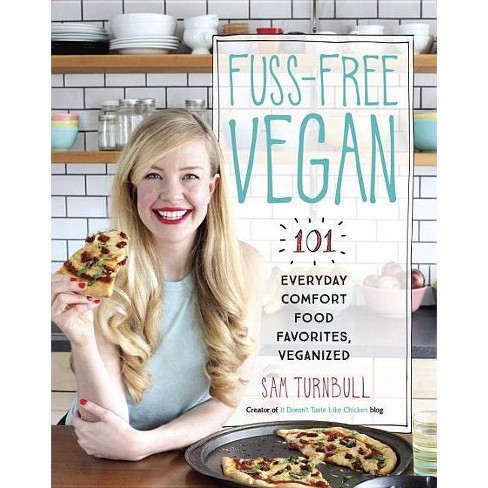 Being vegan doesn't have to mean living off kale and quinoa, or spending your money on fancy and expensive ingredients. And it definitely doesn't have to mean feeling limited for choices of what to eat! What if "vegan food" could mean cheesy nachos and pizza, hearty burritos, gooey spinach and artichoke dip, decadent chocolate cake or even crème brûlée? Well, it can. In Fuss-Free Vegan, Sam Turnbull shows you that "vegan" does not equal unappetizing dishes, complicated steps, ingredients you have never heard of, or even food that tastes healthy. Instead, she gives you drool-worthy yet utterly fuss-free recipes that will bring everyone together at the table, vegans and non-vegans alike, in a chorus of rave reviews.
This is the cookbook Sam wishes she had when she went vegan: one that recreates and veganizes the dishes she loved most in her pre-vegan days, like fluffy pancakes and crispy bacon, cheesy jalapeño poppers and pizza pockets, creamy Caesar salad and macaroni and cheese, rich chocolate brownies and holiday-worthy pumpkin pie, to name just a few. (And there's no hummus recipe in sight.)
Say goodbye to searching endlessly around for that one special ingredient that you can't even pronounce, or cooking dishes that don't deliver on their promise of yumminess; instead, say hello to ingredients you can pick up at your local grocery store, step-by-step techniques, and Sam's enthusiastic voice cheering you on throughout this fun, approachable cookbook. With 101 tried-and-tested, one-of-a-kind vegan recipes for every meal, from breakfasts to lunches to dinners, and even snacks, desserts, appetizers and vegan staples, as well as handy menu plans and tips to amp up the recipes and your vegan life, Sam Turnbull and Fuss-Free Vegan are your ultimate guides in the new vegan kitchen.

Praise for Fuss-Free Vegan "Sam Turnbull has done it all! Mouthwatering easy-to-follow recipes that will work for any cook. There are show-stoppers such as lentil loaf wrapped in puff pastry, crème brûlée, creamy rosé linguine, as well as all the classics such as burgers, soups, salads, mac and cheese, and so many more that are truly fuss-free! The photos alone make me want to jump right into the book!"
Chloe Coscarelli, vegan chef and cookbook author "This delightful cookbook knocks vegan cooking right off the proverbial pedestal and brings it down to earth for all. Through Sam's simply spectacular recipes, you'll not just enjoy a wildly flavorful meal, but you'll learn lots along the way about this powerful lifestyle choice."
Chef Michael Smith, author of Make Ahead Meals "Curious about going vegan but don't want to give up your favourite foods? Fuss-Free Vegan is the book you need! From cozy waffles to hot, cheesy pizza and decadent brownies, Sam recreates all our food favorites! With engaging spirit, Sam invites us into her cheery vegan kitchen."
Dreena Burton "Cooking in restaurants over the past four decades, I've noticed a rather steep pike of interest in vegan cooking. Nary a service goes by without someone inquiring as to what vegan dishes are on the menu. For me, it has been a decade-long scramble to respond. Thankfully, Sam Turnbull has given me some wonderful inspiration in Fuss-Free Vegan."
Jamie Kennedy "With witty notes, delicious and approachable recipes, and drool-worthy photography, Sam Turnbull proves that even after you go vegan, you can have your (*insert whatever food you think you'll miss by going vegan*) and eat it too."
Kristy Turner

SAM TURNBULL is the creative voice and vision behind the popular vegan blog It Doesn't Taste Like Chicken. When Sam decided to go vegan, she had a difficult time finding quick, easy and satisfying recipes, so she started to create her own! She now shares them with her many fans on her blog and, now, in her first cookbook. Sam lives in Toronto, Canada.
If the item details above aren’t accurate or complete, we want to know about it.

Let There Be Light - by Dan Gordon & Sam Sorbo (Paperback)

The Secret Harmony of Primes - by Sam Vaseghi (Paperback)

One of my all time favorite cookbooks

5 out of 5 stars
Would recommend
stveganthedivine - 3 days ago, Verified purchaser
This is one of my favorite cookbooks. The recipes are simple and well thought-out. I haven’t had a dud yet. I received this book as a gift, and I in turn bought it as a gift for someone else. It’s a classic.
Did you find this review helpful?

5 out of 5 stars
conniebird - 1 year ago
I got this book after shifting to a vegan regime. It is a lifesaver. Sam's recipes use easily available ingredients, and are written out clearly and simply. The food is wonderful: caramelized onion pizza, rice paper (yes!) bacon, chickpea salad, braised tomato tofu burritos, and much more. There is a good blend of breakfast food, baked goods, soups, salads and main dishes. In addition, you can make vegan cheese, mayo and other basics. Highly recommend!
Did you find this review helpful?