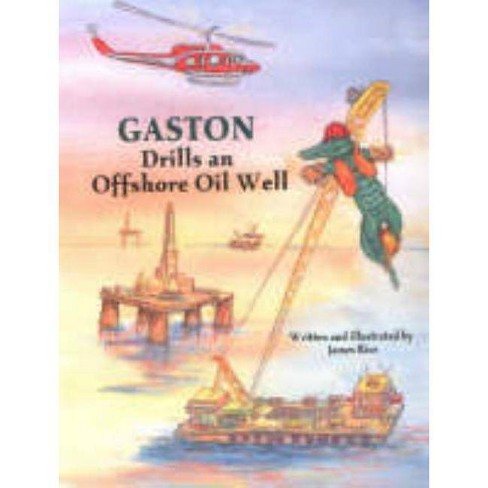 $10.99
no reviews yet
be the first!be the first! ratings
Shipping
Free standard shipping with RedCard
Loading, please wait...
Help us improve this page

"Forget Dancer, Prancer, Comet, and Vixen. . . . Good Clement, wherever he is, will not be gnashing his teeth." --New York Times Book Review

"Rice is especially good with facial expressions, whether they are on a Texas jackrabbit, a longhorn steer, a dusty cowboy, or the green and long-nosed alligator named Gaston."
--Library Journal

Intrepid Gaston, the green-nosed alligator, one of the most celebrated characters in modern juvenile literature, embarks on a brand-new adventure--drilling an oil well in the Gulf of Mexico off the coast of Louisiana.

Gaston--whose previous quests have taken him on a Christmas Eve flight with St. Nicholas, to a Mardi Gras celebration in New Orleans, on a stint as a cowboy on the Texas range, and to a job as a pipeline roughneck--decides to invest his hard-earned savings in an oil well after learning of the oil business's profitability and receiving a tip from a friendly crab.
As in Gaston's previous adventures, the locale, terminology, and techniques described are authentic. Gaston Drills an Offshore Oil Well gives young people a basic introduction to the problems and procedures involved in producing America's oil.

Widely acclaimed as the South's leading illustrator of juvenile books, James Rice is the illustrator and/or author of over sixty titles with almost two million copies in print. Rice was born on a farm in Coleman County, Texas, and currently resides in Hico, Texas. He has taught art at the grammar-school, high-school, and university levels and enjoys talking to schoolchildren across the country about writing and art.

"Rice's pictures are well drawn, each character is an individual. Even his animals have 'personality'--and the pictures are more than funny, they are witty."
--New Orleans Times-Picayune

"James Rice's imagination is clever and his creation of Gaston the alligator . . . brings joy, smiles, laughter and chuckles all year 'round. . . . The author-illustrator captures the fancy and imagination of children and grown-ups, regardless of age."
--Irving Ward-Steinman