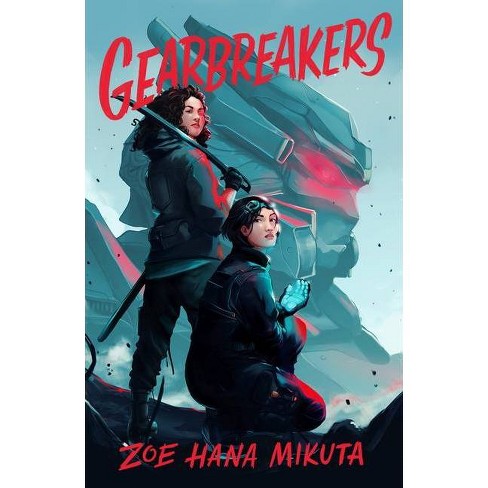 An electric YA debut novel about colossal mechas, a tyrannical regime, and two girls on opposite sides of a war who discover they're fighting for a common purpose--and falling for each other.

We went past praying to deities and started to build them instead... The shadow of Godolia's tyrannical rule is spreading, aided by their giant mechanized weapons known as Windups. War and oppression are everyday constants for the people of the Badlands, who live under the thumb of their cruel Godolia overlords. Eris Shindanai is a Gearbreaker, a brash young rebel who specializes in taking down Windups from the inside. When one of her missions goes awry and she finds herself in a Godolia prison, Eris meets Sona Steelcrest, a cybernetically enhanced Windup pilot. At first Eris sees Sona as her mortal enemy, but Sona has a secret: She has intentionally infiltrated the Windup program to destroy Godolia from within. As the clock ticks down to their deadliest mission yet, a direct attack to end Godolia's reign once and for all, Eris and Sona grow closer--as comrades, friends, and perhaps something more... Praise for Gearbreakers:

An absolute joyride ... Zoe Hana Mikuta is a talent to be in awe of. --Chloe Gong, New York Times-bestselling author of These Violent Delights Dark, fierce, thrilling, and tender, Gearbreakers will make your blood sing. --Nina Varela, author of Crier's War

An absolute joyride of a story set in a vivid, arresting world. Gearbreakers is sci-fi at its very finest, combining the grandeur of mecha fighting machines with the intimacy of (splendidly feral) found family. Zoe Hana Mikuta is a talent to be in awe of. --Chloe Gong, New York Times-bestselling author of These Violent Delights

Dark, fierce, thrilling, and tender, Gearbreakers will make your blood sing. Set in a ruthless, vividly imagined world against the scope of gods and sword-fighting mechas and a crushing war, Zoe Hana Mikuta deftly balances the brutal with the hopeful. An electric heart beats on every page of this breathlessly paced cyberpunk adventure. --Nina Varela, author of Crier's War

An intense sci-fi adventure with heart, hard choices, and found family ... Delivered through propulsive prose and immersive worldbuilding, Gearbreakers is twisty, ominous, and high-octane. ... Glitteringly cinematic. --Tor.com Even more entertaining than a big summer blockbuster. --PopSugar A brutal and commanding debut ... Mikuta has delivered an extraordinary novel that perfectly balances high-octane action with intimate character development and tender hope. --Vulture Zoe Hana Mikuta's Gearbreakers will ruin your life and I mean that in the best way possible. ... Will blow your mind. --Culturess

Like Pacific Rim, Gearbreakers brings a sense of the poetic to the action-driven proceedings. In the case of Pacific Rim, the poetry was in the visuals, while in Gearbreakers, it manifests in the musicality of the language. Debut author Zoe Hana Mikuta has a way with words, and it will be exciting to see how her voice develops over time. --NPR Frantic, bordering on chaotic, fight scenes deftly convey the world's reality, wherein second-guessing guarantees death. ... Quippy exchanges among the inclusive cast bring a levity that balances their grim realities, and the cliffhanger ending of this action-packed series starter suggests that a deeper political conspiracy will unfold in the sequel. --Publishers Weekly

Zoe Hana Mikuta currently attends the University of Washington in Seattle, studying English with a creative writing focus. She grew up in Boulder, Colorado, where she developed a deep love of Muay Thai kickboxing and nurtured a slow and steady infatuation for fictional worlds. When she is not writing, Zoe can be found embroidering runes onto her jean pockets, studying tarot or herbology, or curled up with a cup of caramel coffee and a good, bloody but heartwarming book. Gearbreakers is her debut novel.
If the item details above aren’t accurate or complete, we want to know about it.

A Lesson in Vengeance - by Victoria Lee

Wings of Ebony - by J Elle